Accessibility links
Credit Crisis Puts Mall Owner On The Ropes General Growth Properties, America's second-largest mall operator, spent $14 billion buying up retail buildings. Much of that money was borrowed. Now the debt is coming due, just when lenders are clamping down.

Have you noticed signs of the recession?

Send us photos from your local mall. 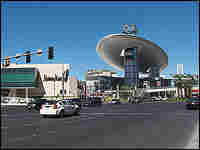 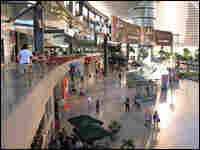 The United States has more retail space per person than any nation in the world. There's room to roam at the Fashion Show Mall. Godzilla128 via Flickr hide caption

The economic crisis has been chewing through the retail sector, causing trouble for shopkeepers and their workers. But it's also causing pain for companies that own the malls where many stores rent spaces. Now the second-biggest mall owner in the U.S. is in real trouble.

Back in 2004, General Growth Properties spent $12 billion, much of it borrowed, to buy the Rouse Co. In recent months General Growth has struggled with mortgages on two Las Vegas Strip malls, for a total of $900 million. A spokesperson for General Growth said the company still hopes to work out a deal with creditors. If it can't refinance, industry analysts say, General Growth could get pushed into bankruptcy.

One analyst, Rich Moore of RBC Capital, notes that General Growth wanted to be among the biggest players so it could attract the best stores. The company ended up second, to the Simon Property Group, and took on heavy debt to get there.

Mall owners use mortgages for major purchases, just the way families use mortgages to buy homes. But the mortgage for a mall is usually much shorter, with banks offering terms for five years or so along with the right to negotiate for an extension. If the negotiation fails, the mall owner has to pay off the mortgage, immediately. That's a terrifying prospect for the mall industry, but not a frequent occurrence.

"What's interesting is over the past 20 years it really hasn't been an issue," Moore says. "As long as the mall is high quality, you will typically, as a landlord, find the money out there to refinance that debt."

When the debt on its Las Vegas properties came due in November, General Growth got a one-month extension, then another extension.

"They went right up to the wire," Moore says. The new due date has passed, and the company is still trying to work things out.

"It was in one sense very exhilarating, but in another sense very terrifying," he says. "Basically we had a very large, very successful company asking banks, insurance companies, anyone who is interested, 'Please lend me money on two very, very good retail properties.' And the lending community simply said, 'No.' "

Moore says a lot of General Growth's debt is coming due. Its stock price, which had been more than $40 a share, has fallen to 50 cents.

He doesn't think bankruptcy is really in anyone's interest. One solution could be for General Growth to sell some of its malls and hope to raise enough money. That might mean turning over some prized properties to the competition.

At this point, buying up someone else's mall is almost the only way for mall companies to get bigger. The U.S. is done building malls for a while. By one count, the U.S. has 20 square feet of retail space per person. That's more than any other country.

If General Growth chose to sell, the Simon Property Group would be on the short list of possible buyers. Headquartered in Indianapolis, Simon owns malls in 41 states, and in France, Italy, South Korea, China, Mexico, Poland and Japan.

CEO David Simon won't say whether his company would be interested.

"I'll answer [the question] generically," he says. "If we can buy great retail at a great price, we're always interested."