Accessibility links
QWERTY Love: Typewriters Endure In A Digital Age Before the advent of cell phones and texting, typing was done with all 10 fingers — not just two thumbs. Those were the days of clackety machines of communication called typewriters. Those days aren't totally gone. In the heart of California's Silicon Valley, business is still clacking. 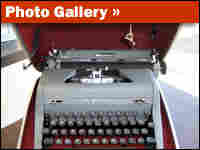 The Allure Of The Typewriter 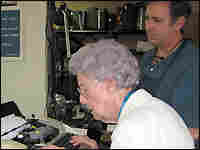 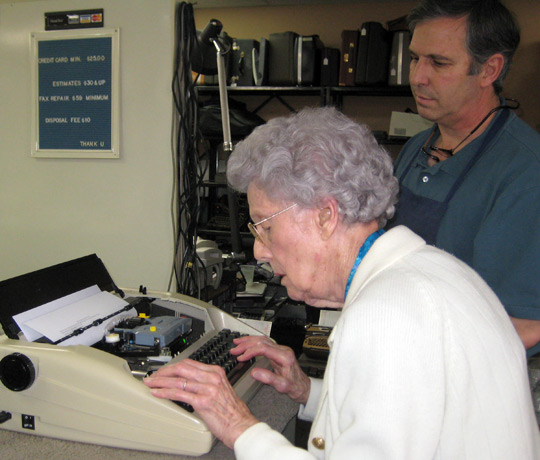 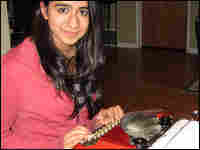 Ish Arora received a 1930 gleaming red Remington as a gift for her 16th birthday. She named it after a character in one of her favorite novels, Doctor Zhivago. Cindy Carpien/NPR hide caption 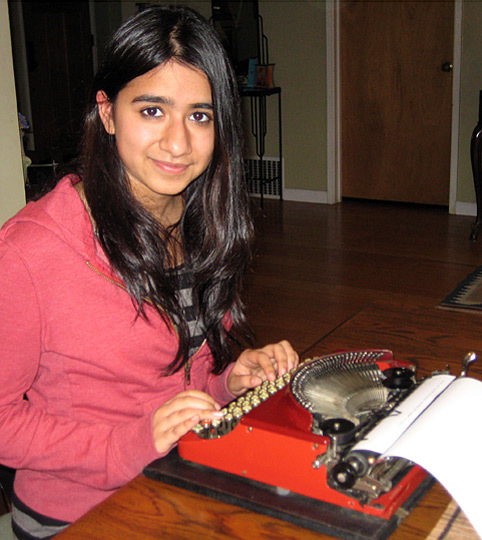 Ish Arora received a 1930 gleaming red Remington as a gift for her 16th birthday. She named it after a character in one of her favorite novels, Doctor Zhivago.

Fascination with the tap, zip and ding of keys and carriage even extended into comedy. See Jerry Lewis perform his famous routine to the song "The Typewriter."

Pulitzer Prize-winning writer Wallace Stegner was a customer of John Sansone's. Stegner, who was born 100 years ago in February, taught English at nearby Stanford University.

"He had an Olympia manual," Sansone recalls, "and he would bring it in every couple of years for a cleaning or repair. He was pretty much just another customer."

Stegner received the Pulitzer in 1972 for Angle of Repose and wrote more than 30 books on his typewriter. He reportedly never used electric typewriters, only manuals.

"He typed with two fingers, hunt and peck — at a very rapid rate, I might add," says his son Page Stegner, who compiled The Selected Letters of Wallace Stegner. "He was missing a finger on his left hand, so he never learned to type the way the rest of us typed, but he went very fast."

Wallace Stegner felt electric typewriters and computers went too fast. He needed the mulling time of a manual, the slower ritual of rolling in the paper, poising fingers over the keys.

Long ago, before the advent of cell phones and texting, typing was done with all 10 fingers — not just two thumbs. Those were the days of clackety machines of communication called typewriters. Those days aren't totally gone. In the heart of California's Silicon Valley, business is still clacking.

John Sansone's shop on State Street in Los Altos is officially called Los Altos Typewriter and Business Machines. But you won't see the word "Typewriter" in the name on the front window. Sansone took it off to make the business sound more contemporary, and because some customers were giving him a hard time.

Even though he mostly fixes fax machines and printers nowadays, typewriters still need his attention.

Offices continue to use typewriters for certain things, Sansone says. If you want to address an envelope or create a label in triplicate, it's sometimes faster and easier on a typewriter. But you have to hunt and peck just to find the machines.

"They used to be on everyone's desk, but now they're next to the microwave, or they're in a little corner," he says.

Sansone also has regular customers who use typewriters. One of them arrives on a walker, with her white hair neatly permed and her typewriter carried by a friend. When asked what's wrong with it, she replies, "Everything."

Esther Johnson, 103, lives in an assisted living facility nearby. There aren't many places left where she can take her electric typewriter, which she bought from her son when he purchased a computer.

Sansone can't find anything wrong with her typewriter except that it's out of correction paper. He replaces it, no charge, and Johnson leaves the shop a happy customer.

The shop also sells typewriters that Sansone finds and refurbishes. They're mostly old manuals, "preferably cute, interesting looking," he says. "Seriously, that's more important than how they function." Sansone says the manual models have become very attractive to young people who want to be writers.

The bulk of these typewriters are bought by high school and college students. "Most of the feedback I get is, on a computer you have the screen staring back at you, and it inhibits their creative process," he says. "Two people said, on a computer it's too easy to delete things. And a lot of times, you change something and you can't get it back."

Sansone has a few portable Corona No. 3s, circa the 1920s, with flip-down carriages for easy carrying; these were popular with reporters of the day. There's also an Oliver No. 9, circa 1920, with its crazy looking U-shaped, upright typebars, as well as old Underwoods, Royals and Remingtons.

One of Sansone's customers, Alok Arora, bought a 1930 gleaming red Remington portable for his daughter last December for her 16th birthday. "My wife said, 'Look on eBay,' but I am a person who needs to feel the typewriter," says Arora.

His daughter, Ish, loves her Remington: "It's nice to write in silence, and the only thing I hear is the sound of the keys." It was difficult getting used to writing on the typewriter, Ish says, "because obviously you have to press the keys a bit harder. But now I've gotten used to it."

She named her typewriter Pasha, after a character in one of her favorite novels, Doctor Zhivago. Although Ish admits the character is quite despicable, the name intrigues her. She keeps Pasha on a plain wooden desk in a quiet room.

"I feel like when I step into this room and I start to type on Pasha, it's kind of escaping my everyday life, and I can immerse myself in the words," she says.

Ish, a high school sophomore, does all her homework on a laptop but writes poetry on her Remington. She's also used it to write letters to her friends. "They were ecstatic to actually receive a letter in the mail from a typewriter."

Arora, who works for a computer data storage company called NetApp, says he's contemplating buying an old manual for himself. He's inspecting an old Royal and another Remington. "It's a paradox being in the forefront of technology, and here I am working with the typewriter, which was made about 90 years ago."

It might be a paradox, but a number of Silicon Valley computer folks have bought typewriters from Sansone. Sure, they miss the spell-check and save keys, but they like seeing how machines work. They like the sounds. They even like X-ing out words instead of hitting a delete key. And, Arora says, there's something else.

"It shows you the journey, how you arrived. That is where we miss with the latest technology — you miss the process," he says. "To me, the journey is more important than the destination."

Sansone says he doesn't know how long this fascination with the old manuals will last. But the business has had a good, long ride. His father, John Sr., bought it in 1967 when there was high demand for people who could fix typewriters. His father had three mechanics working for him, and other part-timers.

Sansone and his sister Peggy inherited the business from their father in the 1980s and ran it together for 20 years. She moved to Seattle in September, leaving Sansone the sole owner and sole employee of Los Altos (Typewriter And) Business Machines.

How does he feel? Maybe a bit like the lonely Maytag repairman.