Accessibility links
Clem Snide: Pledging Loyalty, With A Catch In Clem Snide's music, nothing is ever simple: Even its most straightforwardly goodhearted love songs shine a light on the risks involved in revealing your heart. In the deliciously sideways gem "With All My Heart," the band goes to great lengths never to try.

With All My Heart

With All My Heart 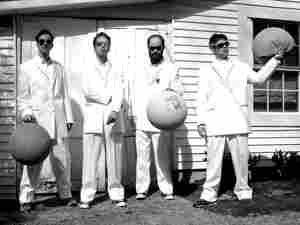 In "With All My Heart," Clem Snide chronicles the way selfishness and vanity can attach themselves to love like parasites. courtesy of the artist hide caption

Since forming in the early '90s, Clem Snide has undergone numerous lineup changes, moved to three different cities and left record labels big and small in its wake. Even though singer-songwriter Eef Barzelay has long been the band's only constant, Clem Snide still managed to break up after recording a long-unreleased 2006 album. Now, after two terrific solo records, Barzelay has re-formed Clem Snide — and marked the occasion by finally unveiling Hungry Bird, an inventive prog-pop curveball with a post-apocalyptic storyline and many moments of dazzling beauty.

After an album-length feast of sonic trickery — culminating in Clem Snide's longest-ever song, the eight-minute "Pray" — Hungry Bird closes with Barzelay at his stripped-down best, augmented by little more than an acoustic guitar. In "With All My Heart," it takes all of 30 seconds for him to unpack a relationship's complex, unbalanced give-and-take: " 'Give back what you took from me,' you whispered in your sleep / And who but me would write it down, so now it's mine to keep."

Barzelay is a masterful chronicler of the way selfishness and vanity can attach themselves to love like parasites: He may pledge his loyalty in "With All My Heart," but his promise of "tender words I've memorized" can't help but ring hollow. In Clem Snide's music, nothing is ever simple: Even Barzelay's most straightforwardly goodhearted love songs shine a light on the risks involved in revealing your heart. In this deliciously sideways gem, he goes to great lengths never to try.