Accessibility links
Jazz Guitar Legend Bucky Pizzarelli Still Swings Pizzarelli is known as one of jazz's great chord soloists, as well as an extraordinary rhythm player. Now 83, Pizzarelli was recently honored by the New York Public Library as one of its speakers at the "Duke Jazz Talks," an interview series in which he performed with his son, John Pizzarelli. 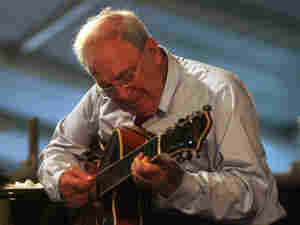 Jazz guitarist Bucky Pizzarelli has played with everyone from Zoot Sims and Benny Goodman to Doc Severinsen on The Tonight Show, where he honed his reputation as one of the great chord soloists and extraordinary rhythm players.

Now 83, Pizzarelli was recently honored by the New York Public Library as one of its speakers at the "Duke Jazz Talks," an interview series that has also featured McCoy Tyner and Dave Brubeck. Pizzarelli performed with his son, jazz guitarist John Pizzarelli. The elder Pizzarelli's latest album, So Hard to Forget, was released in 2008, and the guitarist says he has another project in the works — with John's quartet. In a recent interview with NPR's Jackie Lyden, Pizzarelli discusses his early beginnings, performing with his son and playing for Tiny Tim's wedding.

"I started in New Jersey," Pizzarelli says, "and I was inspired by Joe Mooney, a great blind accordion player who played with my uncle, Bobby Dominick. I was so inspired about playing the guitar that I had to take some lessons and learn some chords just so I could join in the fun. They taught me a lot of things that I use today."

In 1944, when Pizzarelli was only 17, he got his first gig: a series of shows with Vaughn Monroe's dance band.

"We did Scranton, Binghamton and Rochester. I came back and went to school for another two weeks before I graduated," Pizzarelli says. "I went bananas. Here I am, playing in a big dance band, and I used to listen to them all on the radio, and it was a big thrill for me."

Four months later, Pizzarelli was drafted into the Army. But he was able to get his gig back once he left, and he began touring around the country playing "one-nighters" with Monroe's dance band.

In 1952, Pizzarelli joined NBC as a staff musician. There, he played with Skitch Henderson and, later, the Doc Severinsen Band on The Tonight Show.

In those days, the program was known to bring in all kinds of different talent, and the band was expected to accommodate a variety of styles. Among the countless guests and acts with whom the band performed in that time, one that stood out for Pizzarelli was Tiny Tim, the famed ukulele player who got married on the show.

"I tuned his ukulele that day," Pizzarelli says.

Over the years, Pizzarelli worked with many legendary musicians, but one person he never got a chance to play was one of his favorites, Django Reinhardt.

"When I was in the service at the end of the war," Pizzarelli says, "I had to go in a jeep all the way from Austria to La Havre [in France]. As we were going through a town called Nancy, Django Reinhardt was playing there that night. And I had no way to get over to where he was playing. I did get to play with his partner, Stephane Grappelli, the violinist."

"[Grappelli] used to say to me, 'You know, it's a wonder you don't break your strings,' the way I play and the way he was playing," Pizzarelli says. "He always loved the way Django played, and of course they were a great team. But I was happy even to be next to him. We did a lot of gigs."

"I just played the way I always played, and I think he liked that," he says. "You just can't copy somebody else note for note. You can't do what he did."

Pizzarelli is also known as one of the first jazz guitarists to master the seven-string guitar, a technique he learned from jazz guitarist George Van Eps.

"I always wanted to do solo guitar playing," Pizzarelli says, "and when we heard George play, he was demonstrating the Gretsch seven-string that he developed. He was knocking everybody out. After that, we all went to Manny's Music Store on 48th Street and bought out whatever seven-strings they had.

"The whole secret of playing an instrument today, for my money, is you have to be able to play live for people," Pizzarelli says. "Everything else is another story. You know, making records, you can make 25 takes on one record before you get it right. But when you do it live, you gotta do it right, and if you make any mistakes or you go in the wrong direction, you have to know how to wiggle out of those situations and make it work."