Accessibility links
Orlando's 'Locker Man' Saves The Day For Cash-Strapped Tourists Already reeling from the housing crisis, Florida's economy is now struggling with a drop in tourism. But in Orlando, home of Disney World, one small business thrives by helping repeat visitors cut their costs — by leaving their stuff behind in storage. 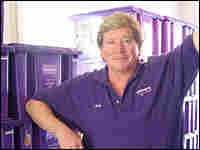 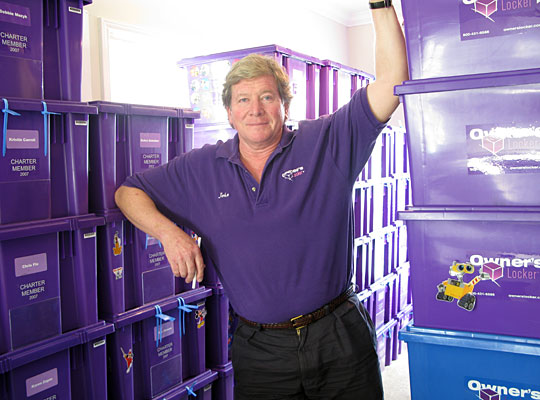 John Van Meter, founder of Owner's Locker, says tourists trying to save money are flocking to his business.

Follow David Greene as he travels the country and help him find interesting stories along the way. 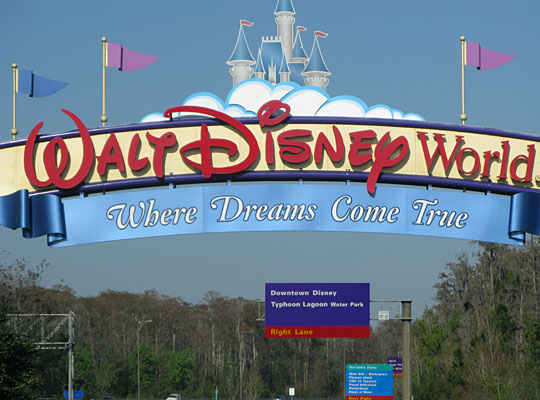 A sign over the road welcomes tourists to Walt Disney World. 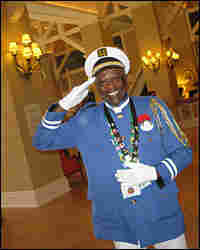 One of the regulars on Van Meter's delivery route is Art Lark, 63, a "greeter" at Disney's Beach Club resort. He says vacationers are still smiling — but they're also talking about budget constraints. David Greene/NPR hide caption 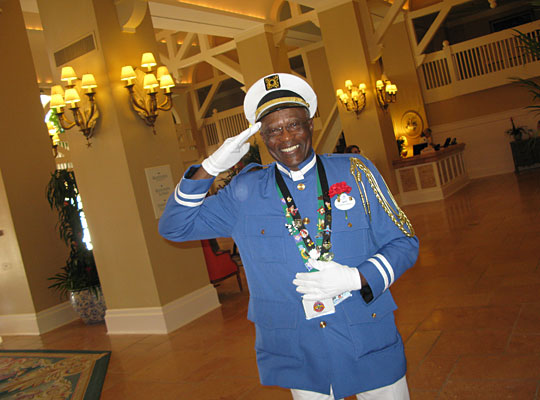 One of the regulars on Van Meter's delivery route is Art Lark, 63, a "greeter" at Disney's Beach Club resort. He says vacationers are still smiling — but they're also talking about budget constraints.

Lark Greets Customers And Talks About The Economy

See More Photos From David's Trek Through Florida And Beyond

As if the heavy toll of the housing crisis weren't enough, Florida's economy is also reeling from a drop in tourism: The number of vacationers dipped last year for the first time since 2001.

But in Orlando, home of Disney World, one small-business owner is helping to save the day — and cut costs — for people who still want to take vacations to the happiest place on Earth.

The hero of this tale is John Van Meter — aka Locker Man — founder of Owner's Locker. To understand why his storage business is thriving, it helps to know a bit about Kim Michaux.

Michaux and her family travel to Orlando from their home in Richmond, Va., three or four times a year. But that's getting harder for them to do.

The force of the recession has hit home for Michaux and her husband, who sell Christmas decorations and other items in a shop and online. But over the holidays, sales were down, and they had to lay off two employees.

"That was hard, but we just had to. And we're working harder ourselves," she said.

Working harder — and making less money. But they wanted to continue to bring their children to Orlando, and to do that, they needed to cut the cost.

Holding Out For A Hero

Michaux realized that the family usually spent a lot of money as soon as they arrived in Orlando, loading up on theme-park necessities such as bottled water, snacks and rain ponchos.

"When we used to come down here, we'd make a trip to the grocery store and spend two or three hundred dollars," she said.

Then she discovered Van Meter's company, which rents lockers. They're actually bright purple plastic containers, about the size of a large suitcase. At the end of a trip, vacationers can put leftover water, snacks, rain gear, clothes — anything that won't spoil — into the bins, which are sealed shut and then stored until the next visit.

It costs about $100 a year to store a locker, but Michaux says it's saving her money in ways she didn't expect — including at the airport. Because the family leaves toiletries in the storage bins, "it's really easy to carry on a bag" when boarding their flight down to Orlando, she says. "We don't have to check a bag, which everyone charges for now, too — all the airlines do."

Van Meter started Owner's Locker in 2007, and somehow, even in a recession, he's picking up new customers almost every day.

Once upon a time, Van Meter was an executive for the oil giant Ashland. He worked at a desk, inside an office building in London — "in a suit every day, with the nice ties and the Mount Blanc pen," he said.

But he left that job four years ago, came to Orlando, and started the business he'd been dreaming up for years. You might say he did a Clark Kent-style transformation. The suit and tie are gone, and now his uniform is shorts and a bright purple shirt with the Owners Locker emblem emblazoned on the chest.

"As you will see, when we're out in the purple van today, everybody smiles when they see the purple guys coming up," he said.

Every morning, Van Meter drives his purple van to Disney resorts and other hotels near and far, delivering the lockers so people have their stuff when they get to town.

The Arch Nemeses Of Small Business

There's no guarantee of a storybook ending for Van Meter, though. In reality, startup businesses have to fight to survive. And Van Meter is up against powerful forces. He has had trouble attracting investors in this economy.

And recently, a bank increased its interest rates so much that Owner's Locker had to stop borrowing from it. The business is mostly relying on Van Meter's own money; he has invested more than a half-million dollars.

"You know, it's been pouring all the savings, the pension plans — everything has gone into this business," he said. "You better believe it better work."

As we drove around in his purple van, I asked Van Meter if he worries about the recession getting worse. What if people just stop vacationing?

"You'd be nuts not to worry about that," he said. "You know, what could happen tomorrow, I don't know. Does it keep me up at night? Of course it does."

For now, though, he's delivering lockers to another resort, always on the lookout for vacationers in distress.