Accessibility links
Consumers Spurn Dining Out For Prepared Foods As consumers look for ways to trim spending, many are eating out less and turning to the ready-to-eat meal sections in grocery and convenience stores. Some retailers have added in-store chefs, tables and prominent displays of prepared foods. 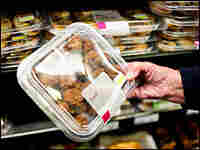 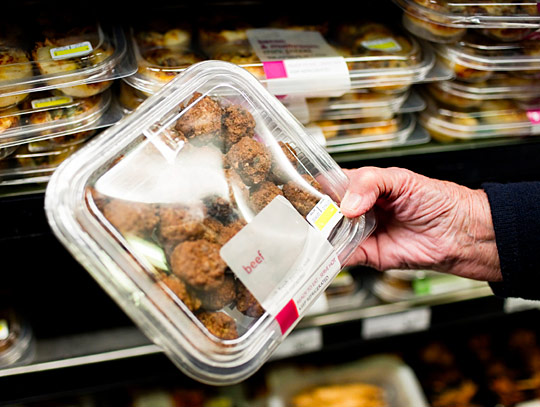 More and more consumers are purchasing ready-to-eat meals in lieu of eating in restaurants.

Groceries are one of the few bright spots in the economy, as consumers looking to save money skip restaurant meals to eat in. Generic brands and pantry staples are selling well.

But grocery stores are also featuring new sections with tables for customers to sit and consume ready-to-eat meals prepared by in-store chefs.

In the prepared foods section of a Whole Foods in Alexandria, Va., there are a pizza station, a bistro, a global cuisine station, antipasti and a huge salad bar. This is where Elmer Goad comes at least three times a week to eat — in part, to save money.

"It's just like eating out, except it's not as expensive and it's usually better," he says.

Goad says he also cooks more at home, which means he buys more basic ingredients. But his recent meal is a fragrant plate of Chinese food, which he'll eat at one of the many tables lining the front of the store.

The Downside To Restaurants

"When I go out, it's not like I'd go [for] fast food; it'd be somewhere halfway decent. And then you'd have tip and you have tax," he says, not to mention gasoline and parking expenses.

By cutting out restaurant dining, Goad says, he's saving $150 to $250 a month — even when he dines at an upscale grocery store like Whole Foods.

At the Whole Foods, Louise Liu has a hand not only in what goes on the menu but in how the store is laid out. A former architect, Liu ditched that profession after a stint in culinary school.

"It's clear that the amount of attention and focus on prepared meals is like nothing we've seen," says Todd Hale, who studies consumer habits as senior vice president for the Nielsen Co.

Hale says Nielsen's studies show that more than half of consumers are curbing their dining out. To take up that slack, gas station convenience stores like Sheetz and Giant Eagle Express are adding fresh prepared meals. British supermarket chain Tesco spurred grocers like Safeway, Albertsons, and even Wal-Mart to experiment with smaller, convenience-store-like formats focused on ready-to-eat meals.

Clearing The Way For Prepared Foods

She says some stores added in-store chefs; some added tables at the front of the store. And many stores feature a prominent display of ready-to-eat items such as rotisserie chicken, fried chicken, sushi, pastas, salads and dessert — right at the store's entrance.

Just after the store opens, the cases are half-empty — ransacked from the night before.