Accessibility links
'Sons of Gandhi' Take To Brazil Streets For Carnival It's Carnival time, and the city of Salvador in northeastern Brazil holds the Guinness World Record for the biggest street party on the planet. This year, Salvador's oldest and largest parade unit has something extra to celebrate.

Listen
'Sons of Gandhi' Take To Brazil Streets For Carnival 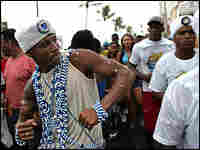 When the "Sons of Gandhi" step out in Salvador, Brazil, this Carnival season, they'll be celebrating their 60th anniversary. David Turnley/Getty Images hide caption 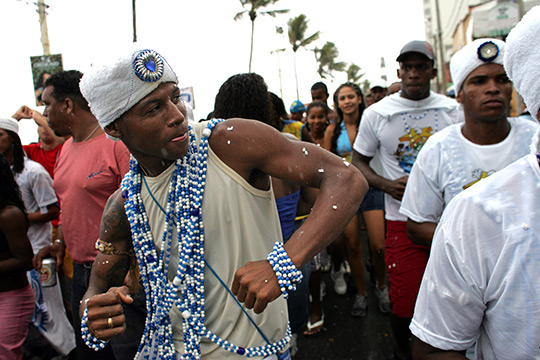 When the "Sons of Gandhi" step out in Salvador, Brazil, this Carnival season, they'll be celebrating their 60th anniversary.

It's Carnival time, and the city of Salvador in northeastern Brazil holds the Guinness World Record for the biggest street party on the planet. This year, Salvador's oldest and largest parade unit has something extra to celebrate.

When the Filhos de Gandhy, or "Sons of Gandhi," step out this Carnival season, they'll be celebrating their 60th anniversary. A wave of 7,000 men in turbans will fill the streets curb to curb — a sea of white cloth on black skin, flowing and bobbing to the music of hand drums, cowbells and chants of praise.

Although the holiday may be an excuse to party for most people, the parade of the Filhos de Gandhy is intended as a spiritual experience. The group, named for the late leader of India's independence movement, marches at several major religious festivals throughout the year. Carnival is their biggest event.

"The Sons of Gandhi serve to bridge the sacred and the profane, a connection that is characteristic of Brazilian culture — and above all, Carnival," says anthropologist Goli Guerreiro.

The first Sons of Gandhi were dockworkers on strike in Salvador who were inspired by Mohandas Gandhi's philosophy of equality and nonviolent resistance to oppression. When they heard of his assassination, they decided to march at Carnival in his name.

They needed costumes, of course, so the prostitutes from the docks gave them their sheets to use as robes, and towels to wrap around their heads. Dressed up to look vaguely Indian, the men marched through Brazil's first colonial capital.

The chants they still sing honor the Yoruba gods worshipped by many Afro-Brazilians. But 60 years ago, African religion was still systematically repressed by the dominant Catholic society. By garbing themselves in their namesake's philosophy of peaceful resistance, the Sons of Gandhi were able to bring their beliefs into the streets without provoking the police.

Today, taking African rituals, music and dance out of the temples and into the streets is an old and respected part of Carnival in Salvador.

A Message Of Peace

Gandhi's message of peace is still the main focus of the Filhos de Gandhy, says Director Antonio Saba as he sits in the group's headquarters. On the wall above him is a huge portrait of Gandhi flanked by Afro-Brazilian gods.

"Peace is our philosophy," says Saba. "It underlies everything we do, and it's what we try to bring to the masses. That's why people stop and wait as we pass by. Because they feel inside that we really represent peace. It's our cadence, our rhythm, our philosophy of life."

But in truth, not everybody who joins the group is looking for peace. Saba says that when asked, almost all of the Sons of Gandhi will say the same thing: They're in it for the women.

"The women go crazy for the Sons of Gandhi. Many women come from other states just to have the chance to go out with one of us," Saba insists.

Of course, Gandhi himself spent much of his life celibate. The Sons of Gandhi also have their rules — since the beginning, they've never allowed women to join their ranks. They also forbid members to consume alcohol or drugs during marches.

The prohibitions aren't a matter of keeping pure, but rather of keeping the peace. In the macho society of Brazil, the Filhos de Gandhy believe that where you have men mixing with women and alcohol, you have fights.

Instead, the marchers are accompanied by various other things such as doves, goats and floats featuring white elephants evoking India, or impersonators of the African gods whose praises they sing. The menagerie reflects what Saba calls the group's "Indo-African" identity.

Guerreiro says this cultural hybridization is what gives the Filhos de Gandhy their appeal.

"They're able to move between diverse cultural universes," Guerreiro says. "They unite international elements and transform them into something local, something profoundly Brazilian. And they can do that because of the universal vision they have."

According to that vision — or at least what's printed on the white T-shirts that have replaced their robes — what the whole world needs is love.