Accessibility links
The Curious Case Of A Missing Academy Award Hattie McDaniel won Best Supporting Actress for her role as Mammy in the 1939 epic Gone With the Wind — becoming the first African-American to win an Academy Award. But her award has been missing for some 40 years. Was it lost, stolen or simply overlooked? 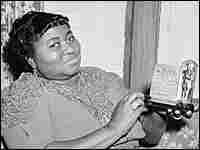 Actress Hattie McDaniel poses with the Best Supporting Actress award she received for her portrayal of Mammy in Gone With the Wind. Bettmann/Corbis hide caption 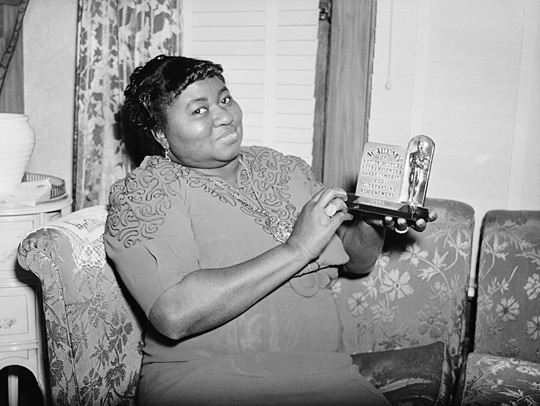 Actress Hattie McDaniel poses with the Best Supporting Actress award she received for her portrayal of Mammy in Gone With the Wind. 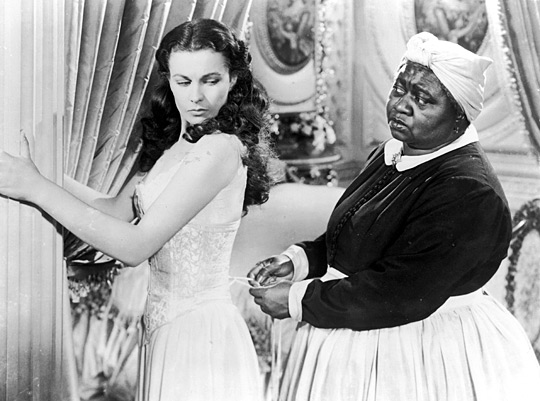 Hattie McDaniel played Mammy alongside Vivien Leigh's Scarlett in Gone With the Wind.

The history of the Academy Awards is filled with fascinating stories — including more than a few about missing and stolen Oscars.

Fifty-five statuettes disappeared from a Los Angeles loading dock just days before the ceremony in 2000. All but two were recovered. In 1938, an unidentified man jumped onstage to accept an award on behalf of Best Supporting Actress winner Alice Brady, who was too ill to attend. The man was never seen again — and neither was Brady's award. In 2002, UPS lost Whoopi Goldberg's Supporting Actress Oscar when it was sent out for cleaning. It was found in a trash bin.

And then there's the case of Hattie McDaniel, an actress who appeared in more than 300 movies. The Wichita, Kan., native won Best Supporting Actress for her role as Mammy in the 1939 epic Gone With the Wind — becoming the first African-American to win an Academy Award. But that award has been missing for some 40 years.

In the years before World War II, winners in the supporting actress category received plaques, not Oscar statuettes. McDaniel proudly displayed hers at her home.

Carlton Jackson, author of Hattie: The Life of Hattie McDaniel, says he thinks the actress had sensed she was in the running for the Academy Award.

"She wrote to some of her friends that she was sort of holding her breath waiting for the announcement ... but she didn't make a big deal of it, quite frankly, until she got it," he says. "Then she made that speech where she could just barely finish because she was overcome emotionally."

"This is one of the happiest moments of my life," McDaniel said after winning the award. "And I shall always hold it as a beacon for anything that I may be able to do in the future. I sincerely hope I shall always be a credit to my race and to the motion picture industry. My heart is too full to tell you just how I feel, and may I say thank you and God bless you."

Toward the end of her life, McDaniel became ill from breast cancer, Jackson says. "She began to parcel out various of her worldly goods, and she presented this Oscar to Howard University in Washington, D.C."

The plaque went on display at Howard's fine arts complex. Then it disappeared. But when exactly it went missing remains a mystery, says Thomas Battle, the current director of Moorland-Spingarn Research Center at Howard.

"The understanding that I've developed has been that it was probably in the late 1960s or early 1970s — or perhaps during a period of student unrest at the university," he says. "But unfortunately all of the principals who would have been involved at the university at that time — administrators and others — are no longer with us, and we have not been able to get the kind of direct information that we would like to be able to pursue this investigation further."

Denise Randle was responsible for tracking the university's inventory of artifacts beginning in 1972. Randle says if the plaque did disappear during the student unrest of the late '60s, it might have been thrown away by someone upset that the award had been given to a black woman for playing the role of a servant.

"[With] the sentiment at the time, if it was during the upheaval, it's quite possible," she says. "At that time, it was 'Black Power, Black Power,' but they may not have understood where she really stood in the film industry and the pioneer that she was."

But Randle, who now lives in Wichita, says she thinks McDaniel's Academy Award was simply misplaced.

"I think it was someone who moved it to a safe place, and then didn't tell anyone where they moved it and then since either retired or forgot about it," she says. "But in looking at the fine arts department would be the most logical place — we couldn't find it."

Wichita actress Karla Burns, who has portrayed McDaniel in one-woman shows for nearly 20 years, has her own theory about what happened to the plaque.

"I do not believe that Hattie McDaniel's Oscar was thrown away. I believe that it was stolen," she says. "The representation of African-American people at that time was very powerful because she had done something that no one else had ever done. And the next African-American woman to win was 51 years later with Whoopi Goldberg."

And there's one more possibility: The searchers over the years could have been looking for a shiny Oscar statuette — and they may have overlooked the plaque McDaniel actually received.