Accessibility links
Troops Must Gain Afghans' Trust, One Expert Says David Kilcullen, a former adviser to Gen. David Petraeus, is among those tapped to offer fresh thinking on Afghanistan and Pakistan. In Afghanistan, he says, the U.S. should focus on providing better security for the local population, and separating the militants from them. 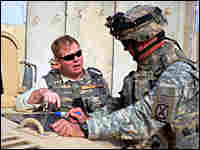 David Kilcullen (left) was counterinsurgency adviser to Gen. David Petraeus during the early days of the military surge in Iraq in 2007. Here, he is shown during a patrol south of Baghdad in May 2007. Spc. Chris McCann/U.S. Army hide caption 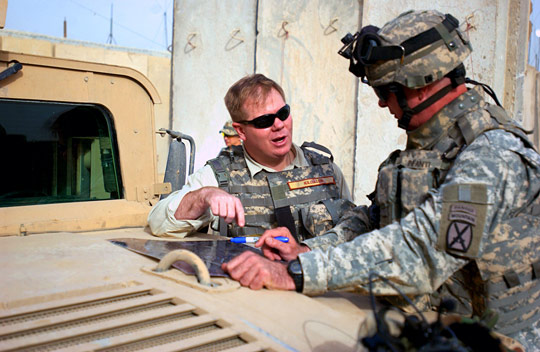 David Kilcullen (left) was counterinsurgency adviser to Gen. David Petraeus during the early days of the military surge in Iraq in 2007. Here, he is shown during a patrol south of Baghdad in May 2007.

Within a few weeks, the administration of President Barack Obama will unveil a series of reviews on Afghanistan and Pakistan.

The reviews offer a chance for fresh thinking on how to handle the deteriorating security situations in these countries. Dozens of experts and analysts have been tapped for their input.

One of those is David Kilcullen, a senior fellow at the Center for a New American Security. Kilcullen approaches the dual challenge of Afghanistan and Pakistan from a different starting point than many others grappling with the problem.

For starters, Kilcullen is Australian — a former army officer and a counterinsurgency expert. The 41-year-old has a doctorate in the anthropology of guerrilla warfare. He also was a senior adviser to Gen. David Petraeus during the early days of the military surge in Iraq in 2007.

Kilcullen travels regularly to Afghanistan and Pakistan, and helped with two of the reviews now on Obama's desk. Kilcullen says the deteriorating situation in Afghanistan must be reversed.

"We have a longer-term problem about how we've been conducting the operation to date," he says. "Afghanistan is really on the point of significant downturn this year."

Kilcullen says routing Taliban extremists from their sanctuaries in neighboring Pakistan is critical to success in Afghanistan. But he says the U.S. also will have to assess — and change — the way a new influx of U.S. troops is fighting the war in Afghanistan.

"We are chasing the bad guys around Afghanistan, and that leaves the population feeling unprotected and insecure," he says.

Kilcullen says the militants are elusive, and don't have to hold and defend territory. He says that instead of hunting the extremists, the U.S. would do better to focus its efforts on providing the local population with better security as a way to gain their cooperation and trust.

"It's slightly counterintuitive, but if you want to make the population feel safe, striking the enemy doesn't actually help you that much," he says.

Kilcullen uses the example of the U.S. dropping a huge bomb in the middle of night a mile from someone's house.

After they've been awoken by the explosion, it's not particularly comforting to be told that the bomb was intended for a "bad guy," Kilcullen says. "[It] doesn't make them feel safe."

Kilcullen says the U.S. needs to isolate the militants from the rest of the population — in large part by creating links with the local people by learning their ways, their relations with other tribes and trying to provide justice. He says that often it is the Taliban that has filled that vacuum. The best way to build those links, Kilcullen says, is to deploy in the communities.

Locals will begin to feel safe, he says, if there is a unit that lives in their village that they see every day, that they know will protect them and ensure that assistance programs work.

"That's critical, that's what has to be done, I think, if we're going to turn this thing around," he says.

Kilcullen's perspective stems from his field work in the 1990s in Indonesia talking to militants in the country, trying to understand what drove them. Those ideas were honed while working with mentors, including American intelligence and military officials, and during his time with Petraeus in Iraq.

Kilcullen says some important lessons from Iraq can be applied in Afghanistan, such as finding militants who can be reconciled. He says 90 percent of the people considered to be Taliban are actually fighting for local, tribal or nationalistic reasons and would be reconcilable under some circumstances.

"At the same time, there is a very small number of radical extremists who are just not amenable to logic, and just have to be shot in the head," Kilcullen says. "And, unfortunately, the kill or capture of those extremists has to continue at the same time as reconciling with those who can reconcile."

Kilcullen says the U.S. military doesn't have time to lose, particularly with a general election scheduled in Afghanistan for late August.

"If we don't provide security and turn things around this year, then we've lost. If we do succeed in turning it around, all we will have done is like in Iraq — we'll have hit the political reset button, and we're in a position to start pursuing a political agenda," he says.

Kilcullen's voice is just one among many providing input to the Obama administration about how to deal with Afghanistan. Not everyone agrees with his approach to counterinsurgency, but certainly his views are being heard in Washington — he was among a group invited to dinner at Vice President Joe Biden's home last week to discuss Afghanistan.