Accessibility links
Roots of Bach Run Deep in Bethlehem The music of J.S. Bach is deeply rooted in eastern Pennsylvania. The Bach Choir of Bethlehem, Pa, has emerged as a keeper of the tradition of singing Bach's choral music that dates back to the city's mid-18th-century Moravian settlers. 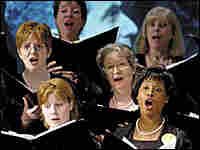 The Bach Choir of Bethlehem has been singing Bach's music since 1898. hide caption 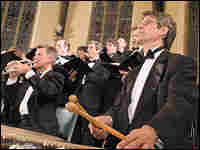 More from the Bach Choir

Hear the Bach Choir of Bethlehem in concert at the First Presbyterian Church in Bethlehem, Pa.

In the mid-18th century, when eastern European Moravians settled into the eastern parts of Pennsylvania, they brought the music they loved with them—the music of Johann Sebastian Bach.

The German composer's outpost in the new world was the small town of Bethlehem, Pa. It's a place where Bach himself might have felt at home, as the town was constructed like a typical small north German city.

The Moravians built Bethlehem and eventually built up their own orchestra and chorus. As far back as 1823, a Bethlehem musician got his hands on a first printed edition of one of Bach's cantatas and made copies of it. Those copies are the earliest evidence of Bach's music in America.

This was a time when Bach had fallen out of fashion, even in Europe. It would take a famous composer like Felix Mendelssohn to spark a Bach revival a few years later in 1829 by performing parts of the St. Matthew Passion. But Bach in Bethlehem has always remained strong.

The most enduring ensemble to come from Bethlehem is the Bach Choir of Bethlehem. The group has been singing Bach's music since 1898. It also headlines the Bethlehem Bach Festival, now celebrating its 100th anniversary with performances through this weekend.

The group has performed at Carnegie Hall and the White House, and on Television. It was the first ensemble in America to give a complete performance of the Christmas Oratorio and Bach's late masterpiece, the mighty Mass in B Minor.

"It's Bach's last will and testament," says Bach Choir conductor Greg Funfgeld. "What he was trying to show is a summation of everything he had learned about harmony counterpoint fugal writing."

The all-volunteer Bach Choir of Bethlehem is 95 members strong. The musicians do not get paid. They sing for the love of the music. Eve Campbell has been a Bach Choir chorister for 35 years. She says Bach's music offers its own rewards. "It's there to help us when we have times in our life when we need comfort, or when you just want to burst for joy, " Campbell says.