Accessibility links
For Most People, Gluten Isn't a Diet Enemy Gluten is everywhere, from pizza, bread and ketchup to ice cream and prescription drugs. A small percentage of Americans can't tolerate the wheat protein, which has a gluey nature. But more people are dropping gluten from their diet to see if it cures what ails them.

Listen
For Most People, Gluten Isn't a Diet Enemy 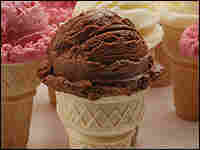 Gluten, a wheat protein, is found in everything from breads to salad dressings to ice cream. iStockPhoto.com hide caption

How to Read a Food Allergy Label

Just as the FDA considers an industry-wide standard definition for "gluten-free" labels on food, the agency has already taken a huge step in easing a health risk for the increasing number of Americans with food allergies: mandatory warning labels.

As of January 2006, all food products must clearly say on the package if they contain any of the foods that cause most allergic reactions: milk, tree nuts, peanuts, soy, wheat, egg, crustacean shellfish or fish.

But the estimated 12 million adults and children with food allergies aren't completely in the clear in supermarket aisles. People with food allergies can't predict the scale of an allergic reaction, but carefully reading food labels is the equivalent of wearing a seat belt.

You've probably seen them in the grocery store aisles: "gluten-free" labels. Food manufacturers have added thousands of items in the last few years.

Gluten is a mysterious ingredient to many of us. It's found in everything from breads to salad dressings, and some ketchups and ice creams. Pet owners have learned from the recent contamination scare that gluten is also added to pet food.

Joe Hotchkiss is chairman of the food science department at Cornell University, and he's also a pro at making pizza dough. Gluten is indispensable to his recipes. He begins with water, yeast and wheat flour. All wheat products contain gluten. It's the protein component of the grain.

"The first thing we have to do is stretch it out, push it together, fold it over," Hotchkiss says as he kneads his dough. "The more we do that, the more it's going to have the texture we want in our pizza dough."

Hotchkiss says it's the gluten that makes the dough strong and chewy. With its ability to hold ingredients together, it's no wonder it has been added to so many things.

Hotchkiss demonstrates by flinging his dough into the air as if he were an Italian baker.

"There it goes," he says. "It spins around and stretches." In his hands, the dough stretches out to full pizza size without tearing.

Nothing is more inviting than the smell of baking bread. Hotchkiss says he loves the taste, and he can't imagine why anyone would choose to eliminate wheat, and therefore gluten, from their diet.

"For the average person who is not sensitive to this protein, there's no reason to avoid it," Hotchkiss says.

The exception, he says, would be people who are allergic to wheat protein or have sensitivity to gluten.

Wheat has been cultivated for thousands of years, and it's a staple of the American diet. But evolving ideas about nutrition mean more people are experimenting with wheat-free diets.

Whole Foods Market now sells more than 1,000 "gluten-free" items. Many stores carry a freezer full of baked goods that are made with alternative ingredients such as rice and bean flours.

Customers now come in asking for these gluten-free products, she says.

The demand first came from people who have celiac disease, an autoimmune condition which requires sufferers to eliminate wheat from their diet.

But lately, there's been a segment of shoppers who are just curious.

"We've seen a growing trend of customers being more 'ingredient-centric,' as we would say," Kenney says.

These customers are looking to eliminate certain ingredients. When something like oat bran or sugar comes into the spotlight, some consumers build their diets around getting as much of the ingredient as possible or avoiding it completely. This may be part of what's happening with gluten now.

"It's rather interesting that the whole celiac disease problem has created a celiac fad diet," says Dr. Leo Treyzon, who specializes in gastrointestinal disorders at the UCLA.

About 2.5 million Americans are thought to have celiac disease. The prevalence is a little less than 1 percent of the population. The disease causes serious irritation and inflammation of the gut. For those people, avoiding gluten is not a fad. It actually stops the disease.

But Treyzon says a lot of other people are diagnosing themselves with gluten intolerance. And some report less bloating or stomach cramps on a wheat-free diet.

"If they feel better when they don't ingest gluten, there's no harm from doing that," he says.

It's tough to stick with a gluten-free diet, especially for people who eat in restaurants or buy processed foods. The ingredient turns up in unexpected places. Gluten is added to some prescription drugs and vitamins to add form and bulk.

Recent headlines over contaminated gluten in pet food illustrate the broad reach of the ingredient.

Garrett Kraus, who lives in McLean Va., says he put his cats on a homemade meat and fish diet because of the contamination scare.

"Oh, they loved it," Kraus says. They ate chicken, tuna and salmon. Kraus says he's a little concerned about contamination in human food, particularly in processed foods that contain gluten imported from China. But he figures the risk isn't that significant.

The FDA says Kraus is right not to worry. The ongoing investigations show that contaminated gluten has made its way into some feed for animal, fish and poultry. But FDA officials say the amounts are so diluted that there's very little risk to humans.

Hotchkiss says the pet-food contamination may raise awareness of the need for inspections. But he says there's no need to fear gluten. It's not a dietary villain for most of us.

"I think the old nutrition advice is still the best," Hotchkiss says. "Eat a little of everything and a lot of nothing!"

And when it comes to pizza, Hotchkiss says he likes it best topped with anchovies and fresh mozzarella. 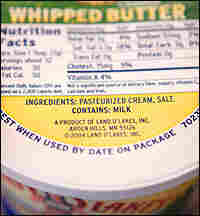 The label on a tub of Land O Lakes butter lists milk as an ingredient that may cause an allergic reactions. Scott Olsen/Getty Images hide caption

A food with a "gluten-free" label may not be gluten free at all. Such products may contain trace amounts of the wheat protein — enough to trigger a reaction in some people. The FDA is currently considering an industry-wide standard definition for "gluten-free."

Meanwhile, the agency has already taken a huge step in easing a health risk for the increasing number of Americans with food allergies: mandatory food labeling.

As of January 2006, all food products must clearly say on the package if they contain any of the foods that are responsible for most allergies: milk, tree nuts, peanuts, soy, wheat, egg, crustacean shellfish or fish.

"Before this labeling act went into effect, there were 20 different ways that milk could appear on a label," says Anne Munoz-Furlong, founder of the Food Allergy & Anaphylaxis Network. "That made it impossible to teach a 7-year-old to look at a label and to know what to avoid. Now, words are in simple language, and you don't need a science dictionary when you go to the grocery store."

The estimated 12 million adults and children with food allergies aren't completely in the clear in supermarket aisles. People with food allergies can't predict the scale of an allergic reaction, but carefully reading food labels is the equivalent of wearing a seat belt, says Elizabeth Matsui, a pediatric allergist at the Johns Hopkins Children's Center.

Labeling pitfalls to keep an eye on:

Read the Product Label – Every Time: A product's ingredient list might have been free of a specific allergen the last time you bought it, but manufacturers can change ingredients without warning.

Dairy Free: "Free" labels, such as "peanut free" and "gluten free," aren't regulated by the FDA. "Dairy free" can be particularly tricky. On the front, a product may say "dairy free," but on the back, casein/milk may be listed under ingredients. Examples of food advertised as "dairy free" that may contain milk: coffee whiteners, whipped toppings, imitation cheeses and some soft-serve ice creams.

May Contain: This unregulated label is a sore spot with some food allergy experts and advocacy groups. "May contain" labels are a safety net for what's called unintentional "cross-contamination" of a food product. That is, a chocolate bar may not be made with peanuts, but it may have been contaminated with a trace amount of peanut because it was produced on the same manufacturing line as a peanut candy bar.

"The truth of the matter is that nobody really knows what that label means," says Elizabeth Matsui, a pediatric allergist at the Johns Hopkins Children's Center. "The 'may contain' labeling could mean anything from there's no allergen in that food to there is actually a great deal of allergen from cross-contamination."

And groups that might not spend a lot of time considering risk — teens, for instance — are likely to disregard the labels, says Munoz-Furlong.

"Teens who have survived reactions, they're telling us they ignored the 'may contain' label because it's on so many things, and they don't believe the label. We need to make these labels believable."