Accessibility links
The Return Of The Asian Longhorned Beetle The invasive Asian longhorned beetle has turned up in Worcester, Mass., and it's hungry for hardwood trees. Over 4,000 trees in the Worcester area are infested and slated for removal, but five times that many might have to be cut down.

Listen
The Return Of The Asian Longhorned Beetle

The invasive Asian longhorned beetle has turned up in Worcester, Mass., and it's hungry for hardwood trees. Foresters are worried the infestation will spread northward into New England forests, killing the sugar maples that fill sap buckets and attract leaf peepers. Over 4,000 trees in the Worcester area are infested and slated for removal, but five times that many might have to be cut down. 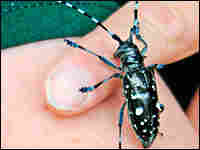 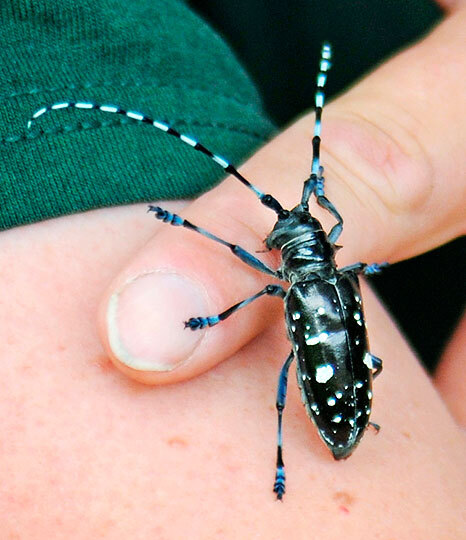 A longhorned beetle infestation in Chicago took 10 years and $70 million to eradicate.

In late July, Donna Massie saw some unusual beetles outside her apartment in Worcester. They were more than an inch long, black with white spots, and sported long, striped antennas. Curious, she started searching for beetle images on the Internet.

"Finally I saw what I thought was the beetle, which it said, Asian longhorned beetle," says Massie. "Well, the very first thing I pull up is an alert from the government."

Government Clamor Over A Beetle

Massie reported her sighting. In two days her driveway was packed with government vehicles. Local, state and federal officials quickly began surveying nearby trees, even enlisting dozens of smokejumpers to climb through the canopy. They found thousands of infested trees.

Ten crews are now hoping to cut down 10,000 infested trees, grind them to bits and ship them off to biomass power plants. They want to do this before the adult beetles chew their way out of the hearts of the trees next summer.

"We're looking at a severe threat to our entire northeastern hardwood forest," says Clint McFarland of the U.S. Department of Agriculture.

McFarland leads the eradication program. For years, he battled these beetles in New York and New Jersey, where they now seem to be mostly contained. But he says this is different, because Worcester sits at the southern edge of a forest extending from upstate New York to Maine, and well into Canada.

"The preferred hosts for the Asian longhorned beetle are your maples, your willows, your birch, and your elms," says McFarland, "and these are all a large, large percentage of the density of our northeastern hardwood forest."

McFarland says a massive beetle infestation could cost billions to the lumber, tourism and maple syrup industries — and have significant but harder-to-quantify environmental impacts.

The beetles spread slowly on their own, but often get human help. Larval beetles first hitchhiked from China in wood pallets. Now there's concern that someone will violate a quarantine imposed for 64 square miles around Worcester by taking a load of green firewood to a cabin or campsite in the woods.

"Not moving firewood is very important and it's a message we're going to continue to hammer," says Mike Bohne, who works for the US Forest Service, in Durham, New Hampshire.

Eradicating an infestation in Chicago took 10 years and $70 million. This one could cost more. But Bohne says it's important to respond, even if it sounds expensive.

"The fact that we have a method to eradicate it just means we have to try. You really have to try," he says. "The risk is too great not to."

Crews are cutting down trees all over Donna Massie's neighborhood. She says she'll miss the trees, especially in the fall when their colors were so vibrant.

"Just the whole idea that this beetle, a little beetle," she says, "is going to take all this beauty away — beetle!"

McFarland and Bohne think it's likely that the Worcester infestation has already spawned another elsewhere in New England. They hope there are more people like Massie looking out for the distinctive beetles that emerge in summer months, and the perfectly round, half-inch holes they leave in tree trunks.