Accessibility links
The Frames: Seething Ballads and Upbeat Anthems : World Cafe Driven by singer Glen Hansard's charismatic persona, The Frames have become one of the best live bands working today. Blending atmospheric ballads with rousing rock songs, The Cost finds The Frames' legend continues to grow after more than 15 years in the business.

After struggling through personal upheaval and record-label disputes through most of the '90s, the Irish rock band The Frames entered a new era in 2001, when it released For the Birds. Made without label support — and without pressure from outside forces — the disc was the group's most complex and rewarding (and, not coincidentally, most affectionately received) album yet. Already known as a touring warhorse, The Frames followed that album with 2003's live disc Set List, which topped the Irish charts and laid the groundwork for 2004's beautiful Burn the Maps. 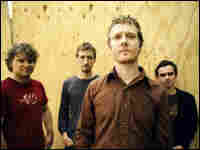 Driven by Hansard's charismatic persona, which he developed through many years of busking, The Frames developed into one of the best live bands working today. Blending atmospheric, seething ballads with upbeat anthems, the group's new disc (The Cost) finds The Frames' star continuing to rise after more than 15 years in the business. Hansard has even worked as an actor, appearing in The Commitments and starring in the new indie drama Once with Czech singer Marketa Irglova.