Accessibility links
Distracted Pedestrians An Increasing Risk Some doctors and safety experts are increasingly concerned about pedestrians who use phones and other electronic devices. They say deaths and injuries are becoming more common because people are distracted while talking on the phone, texting or listening to music through headphones.

Some doctors and safety experts are increasingly concerned about pedestrians who use phones and other electronic devices. They say deaths and injuries are becoming more common because people are distracted while talking on the phone, texting or listening to music through headphones.

At Ohio State University, researchers are looking into the safety of pedestrians who are using cell phones and mp3 players. 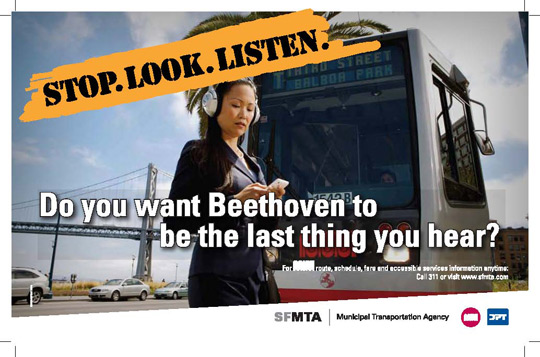 An ad campaign in San Francisco aims to remind people to pay attention on the streets.

How To Stay Safe 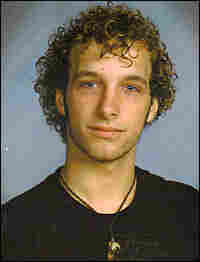 You've probably seen them on the street: cell-phone chatting, music-loving pedestrians who sometimes act as if talking into a mouthpiece or slipping on a pair of headphones raises an impenetrable shield.

But preoccupied pedestrians, especially those listening at high volume, risk more than hearing impairment. Their absorption can create a loss of "situation awareness" similar to that of distracted drivers.

Inattention can have serious — even deadly — consequences on roads and railroad tracks.

Lisa Carolyn Moran, 20, a University of North Carolina exchange student from Scotland, was listening to an iPod while jogging when she stepped into the path of a bus in Chapel Hill last May. Joshua Phillips White, 16, was wearing earphones and walking on a train track in Cramerton, N.C., last November when a freight train hit him from behind, killing him; police said he apparently didn't hear the locomotive approaching. Alan Eaton-Chandler, 17, was killed under the same circumstances just last Tuesday when he was hit by an Amtrak train in Comstock Township, Mich. And Vicky Baker, 39, was talking on her cell phone when she was struck and killed by a train in Albertville, Ala., in December.

Listening on the run creates "a public health issue, and it's one that, frankly, is incredibly easy to overlook," says Brian Fligor, who directs the diagnostic audiology program at Children's Hospital Boston and teaches at Harvard Medical School.

If pedestrians' ears are "occupied by some sound, whether it's another person's voice or a podcast," Fligor says, "it may isolate them from sounds they may need to hear, such as the train whistle, the ambulance siren, the car horn, the bike messenger's bell."

Emergency rooms around the country report treating pedestrians injured while texting or otherwise tuned in to phones and MP3 players, says Nicholas Jouriles, president of the American College of Emergency Physicians. He's also a professor at Northeastern Ohio Universities College of Medicine, in practice there and at Akron General Medical Center.

"I've taken care of patients who've been hit [by a vehicle] or walked off a curb," he says.

The ER reports are anecdotal, but they're so prolific that the physicians college issued a news release late last summer warning back-to-school students to refrain from texting and cell-phone talking while "engaged in any physical activities that require sustained attention."

NPR found at least 11 cases in 2008 alone in which pedestrians' use of portable electronics may have played a role in their deaths, based on news accounts and on information from the emergency physicians group. Most of those deaths involved trains.

But while pedestrians' use of portable electronics has been linked to some injuries and deaths around the country, the scope of the problem is unclear. Aside from random news reports, there's little systematic documentation.

No federal entities contacted by NPR formally collect statistics on injuries or deaths involving electronics-preoccupied pedestrians; it can take years to implement such processes. Widespread use of the technology is relatively new, and no uniform reporting system exists among states.

"We do collect a lot of data about pedestrian fatalities. We know if a person was drunk. We know whether it was a hit-and-run," says Ellen Martin, a spokeswoman for the National Highway Traffic Safety Administration. "We don't have a plan to add this factor, which is not to say it's not a concern. We're concerned about anyone using the roadways or the sidewalks ... about their propensity for distraction."

Concern over pedestrian use of portable electronics is significant enough to have prompted public safety campaigns in San Francisco and Texas and legislative efforts in at least two other states.

Last year, the San Francisco Municipal Transportation Agency introduced a multimedia campaign in the wake of "some tragic accidents," spokesman Murray Bond says. A series of outdoor ads, radio and television spots aim to remind people that "headsets and handheld devices could be a distraction."

One sign shows a headset-wearing woman crossing the street while texting — oblivious to the approaching transit vehicle. It asks, "Do you want Beethoven to be the last thing you hear?"

Bond says the agency sought "a humorous vein" to get audiences' attention, but its intent is serious. "A 40-ton bus and an 80-ton light-rail vehicle cannot stop on a dime," he says. Drivers of municipal buses, trains and maintenance vehicles are getting additional training "so they're constantly alert to someone who may walk into the street, against the light, with a headset on."

Likewise, AAA Texas kicked off a pedestrian-motorist safety campaign in October. "Today's culture of multitasking can create a potentially deadly situation for both drivers and pedestrians who become distracted by the likes of cell phones, BlackBerries, iPods, other electronics devices or food, when they are either walking across the street or driving," the group's CEO, Tom McKernan, said in a statement.

"I think we're in a lot of trouble if we have to give people advice on how to use or not use wireless when walking down the street," says Joe Farren, a spokesman for CTIA, a wireless industry trade group.

"Unfortunately, you can't legislate common sense," Farren says. "We always encourage people to put safety first. If that means waiting to listen to or make a phone call, wait."

The Consumer Electronics Association, a trade group that includes manufacturers of MP3 players, estimated 44 million such devices were sold in the United States in 2008. Spokeswoman Laura Hubbard said the CEA's Web site urges consumers to lower volume levels to avoid damaging hearing and to maintain awareness. "You need to be able to hear what's happening around you," she says.

Apple, the most prominent manufacturer, declined to comment for this story. Christine Monaghan, spokeswoman for its iPod line, said Apple's Web site offers guidance for safe use.

Meanwhile, some researchers are conducting small-scale studies on pedestrians distracted by portable electronics.

Richard Wener, a professor of environmental psychology at the Polytechnic Institute of New York University, says the emerging body of research on distracted drivers led him and two colleagues to look at pedestrians. They found the same relationship between inattention and risk, but a greater vulnerability.

"When you're moving at 2 miles an hour, [you] have more time to make decisions," Wener observes of pedestrians, "but you're not protected by 2 tons of steel."

Wener has collaborated on several studies led by Jack Nasar, an Ohio State University professor of city and regional planning. One study of 127 pedestrians on that university's campus showed that 48 percent of cell phone users stepped into a crosswalk as a car approached. That's a much higher rate of unsafe behavior than was demonstrated by pedestrians without electronics (25 percent) or iPod users (16 percent). Results were published last year in the journal Accident Analysis & Prevention.

The report called for better data on pedestrian-auto accidents — and perhaps smart technology that "could alert pedestrians that they were approaching a crosswalk or that a car is approaching."