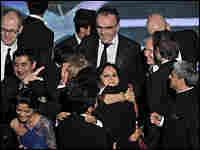 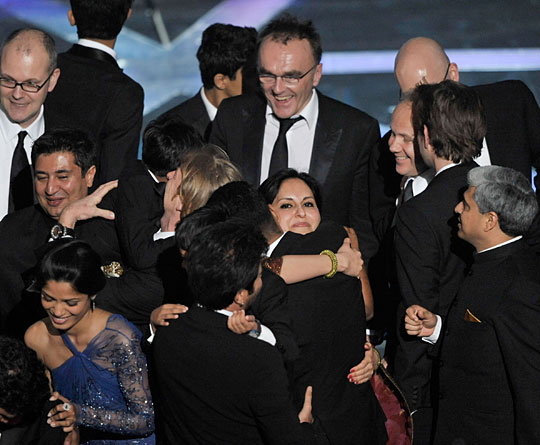 The cast of Slumdog Millionaire celebrated onstage when the movie won best picture. 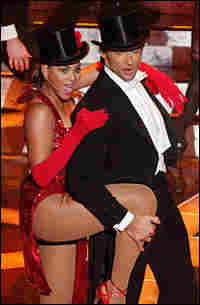 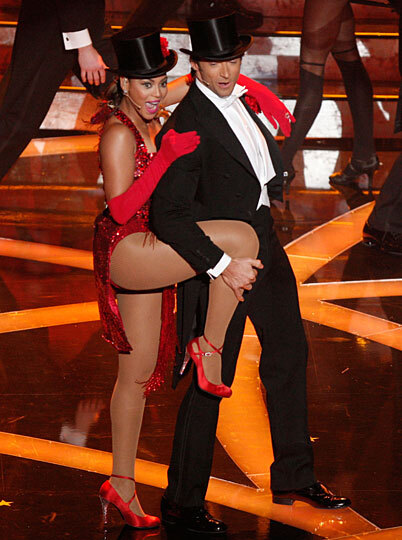 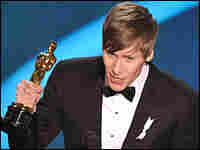 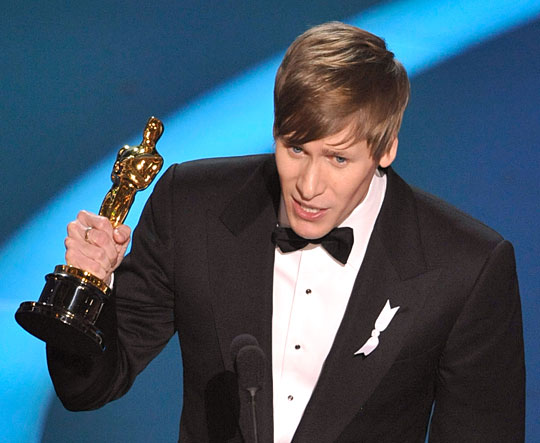 As producer Christian Colson accepted the award for Best Picture, many of the film's previously unknown cast members gathered around him at the podium.

"Together we've been on an extraordinary journey," Colson said. "When we started out, we had no stars, no power or muscle. We didn't have enough money to do what we wanted to do."

The journey from the slums of Mumbai, past Bollywood to Hollywood, was exciting for the actors who played the film's main characters. On the red carpet, the youngest Slumdog actor told NPR the cast felt as though they had just won the game show Who Wants to Be a Millionaire? — just as in the movie.

British director Danny Boyle bounced onstage — as happy as Tigger, he said — when he got his Oscar. He told reporters that Slumdog Millionaire was at its heart a love story: "It is much deeper and more profound and more recognizable and more loveable and more timeless than a game show. ... I love that about it. It is a chance to get yourself lost in romance."

Producers tried to jazz up the Oscars ceremony and its ratings this year by amping up the star power and using past Oscar winners, from Sophia Loren to Robert De Niro, as presenters.

Actor Hugh Jackman emceed the event, cracking jokes about the recession, and singing and dancing his heart out. "Due to cutbacks, the Academy said they didn't have enough money for an opening number. ... I'm going to do one anyway," he bantered.

Some of the winners were funny; the star of the winning documentary Man On Wire, Philippe Petit, performed a disappearing coin trick and balanced an Oscar statue on his chin.

But one of the more stirring moments of the night belonged to the late Heath Ledger, for his performance as the Joker, the bad guy who haunts Gotham City and Batman in The Dark Knight. Ledger's father, mother and sister accepted his highly anticipated Best Supporting Actor award, saying the Oscar statue would be given to his daughter, Matilda.

Vicky Cristina Barcelona star Penelope Cruz became Spain's first Best Supporting Actress winner at the Oscars, and she thanked everyone in Spanish. And a breathless Kate Winslet said she realized a dream when she picked up her Best Actress award.

"I'd be lying if I hadn't made a version of this speech before I was 8 years old and staring in the mirror, and this would have been a shampoo bottle," she said, clinging to her Oscar statuette, awarded for her role as a Nazi prison guard in The Reader. "Well, it's not a shampoo bottle now."

The Best Actor Oscar went to Sean Penn, who took on the role of gay activist and San Francisco supervisor Harvey Milk. Penn smiled uncharacteristically as he thanked the Academy, who he jokingly referred to as "You commie, homo-loving sons of guns."

Backstage, Penn said that on his way to the Oscars he had passed by people holding up signs against homosexuality. He told reporters the protesters were cowards.

"Tell them to turn in their hate card and find their better self," he said, calling on the country and President Obama to recognize gay marriage.

Dustin Lance Black, who won the Best Original Screenplay award for Milk, said if Harvey Milk were still alive, he would want to tell gay and lesbian kids they are beautiful creatures of value who should have civil rights.

"Harvey gave me his story. And it saved my life. It was time to pass it on," he said backstage, choking back tears. "The only thing I wanted to say was to tell those kids out there they're going to be all right."

But the night really belonged to Slumdog Millionaire. A.R. Rahman dedicated his two awards for the film's music to his homeland, India, "and all the people from Mumbai and the essence of the film, which is about optimism and the power of hope in our lives."