Accessibility links
Blair Risked Much in Support of U.S.-U.K. Friendship British and American leaders have praised the deep relationship between the two countries. But no one has offered as much enthusiasm, or risked such political cost, as Tony Blair.

Blair Risked Much in Support of U.S.-U.K. Friendship

Blair Risked Much in Support of U.S.-U.K. Friendship 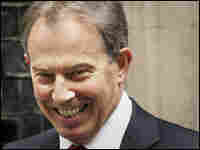 British Prime Minister Tony Blair, who has been in office for 10 years, said Thursday that he will step down June 27. The United States and Britain enjoy a "special relationship," a term that Winston Churchill coined in 1946 and that British and American leaders have echoed ever since. But no one has offered as much enthusiasm, or risked such political cost, as Blair.

Blair internalized the special relationship, analysts say: He wasn't just pro-American; he was American — at least in temperament and political style.

Blair was catapulted to power in 1997, propelled by a public thirst for change reflected in his party's theme song, "Things Can Only Get Better." Blair was "New Labor," not to be confused with "Old Labor," which was widely considered out-of-touch and unelectable.

The new prime minister brought Hollywood flair and American-style pizzazz to 10 Downing Street. "Cool Britannia" was the slogan for the Blair years, and the women elected to parliament with him were dubbed "Blair's Babes."

Blair exuded optimism and possessed a natural ability to gauge the public mood. He demonstrated this when, just a few weeks after he took office, Princess Diana was killed in a car crash. Queen Elizabeth II and other members of the Royal Family reacted coolly, much to the consternation of the British public, who adored Princess Diana. Blair interceded, convincing the queen to publicly mourn a woman now known as "The People's Princess."

Tony Blair believed wholeheartedly in the "special relationship" between the United States and Britain, saying it was any British prime minister's "duty" to get along with his American counterpart. With President Clinton, this was easy; the two leaders were political soul mates, and Blair's centrist New Labor policies were Clintonesque.

Many analysts predicted Blair would have a rockier relationship with President Bush. They were wrong. The two leaders got along from the outset, partly because of their shared religious beliefs and Manichean world view. In an interview with PBS's Frontline, Christopher Meyer, Britain's ambassador to the U.S. from 1997 to 2003, described the two leaders' first meeting at Camp David:

"It got off to a very good start, almost from the first syllable uttered, because Bush said to Blair, 'Welcome to Camp David, Tony. May I call you Tony?' And Blair said, 'Well, thank you for this warm welcome, George. May I call you George?' Then the president said to Blair, without any sort of ceremony or farce or some kind of grandiloquent statement, 'Well, what shall we talk about?' Blair said, 'We might as well start with the Middle East,' and Bush said, 'Good idea. Shall we do Iraq first?' "

Blair rallied to America's aid after the attacks of Sept. 11, 2001, and committed British troops to the U.S. invasion of Iraq in 2003. He did so despite opposition from a majority of British citizens. One million anti-war demonstrators marched in London's Trafalgar Square shortly before U.S. and British troops rolled into Iraq.

As British casualties in Iraq mounted, Blair's popularity plummeted. When he was first elected, 63 percent of Britons said he could be trusted, according to a recent poll by YouGov/Daily Telegraph. Today, that number is 22 percent. His unwavering support for the war in Iraq explains a lot of that decline.

Geoffrey Wheatcroft, who wrote a biography of Blair, voiced a view shared by many British voters:

"For all of his fervent loyalty, Blair has never really understood America — nor how little he and his country now matter in American calculations. ... His relationship was 'special' on only one side of the Atlantic."

In recent months, Tony Blair has been lampooned regularly in the British media as "Bush's poodle" — a caricature underscored by comments overheard during a G-8 summit in St. Petersburg, Russia, last year. President Bush beckoned for the British prime minister by shouting "Yo, Blair."

Blair continues to defend his exceptionally close relationship with the United States, claiming that it has given Britain more clout on the world stage, and that it has led to progress on issues such as climate change. But he concedes that his unblinking support for the United States has hurt him politically.

"I am the person who above all can give evidence as to the difficulty and sometimes the political penalty you pay for a close relationship with the U.S., but we shouldn't give that up in any set of circumstances," Blair said recently.

"In the depths of night, he [Blair] must realize how very wrong he has judged where Britain's national interests lie," Kilfoyle said.

The man expected to succeed Blair, Gordon Brown, is also pro-American, but not as fervently so as Blair.

"Gordon Brown is a traditionalist, but he's clearly not going to have the warm personal relationship with Bush that Blair had," said Philip Stephens, a columnist with the Financial Times newspaper. "The special relationship is loosening."

Brown Waiting in Wings As Blair Bows Out June 27, 2007
Defining Moments in Tony Blair's Leadership May 9, 2007
Blair's Departure Prompts Reflections on Tenure May 9, 2007