Accessibility links
Van Morrison Captures 'Astral Weeks' Live Last November, for the first time in his career, Morrison revisited his second album, Astral Weeks, in concert. The result, Astral Weeks: Live at the Hollywood Bowl, arrives this week, offering a fresh take on one of the key recordings in late '60s rock. 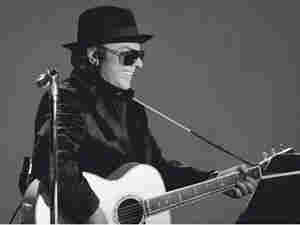 The Irish singer-songwriter Van Morrison recorded a live version of Astral Weeks in November. Courtesy of the artist hide caption

When Van Morrison recorded Astral Weeks in 1968, he had reached a low point in his life. Though he'd scored a hit the year before with "Brown Eyed Girl," he'd made little money off it. Verging on starvation and desperate to escape a contract with his first label, Morrison wound up in a New York studio with a small group of jazz musicians. They worked to create an extraordinarily original piece over the course of just a few days, striking a delicate middle ground between rock and jazz.

Astral Weeks never cracked the Billboard Top Albums chart when it was first released. But since then, it has become touted as one of the most influential pieces of late-'60s rock. In November, Morrison revisited the album for the first time in a concert at the Hollywood Bowl. The results are a real treat, upholding the same openness and sense of exploration that defines the original — even with the addition of more musicians and a string ensemble.

Click the link above to hear the full review of Astral Weeks: Live at the Hollywood Bowl.