Accessibility links
How To Erase Old Hard Drives Without A Drill Bit Many of us hold on to old computers because of potentially embarrassing materials on the hard disk. There are, however, a variety of options for those who take the machines to an e-waste disposal site or call the collector to come pick them up. 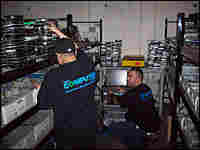 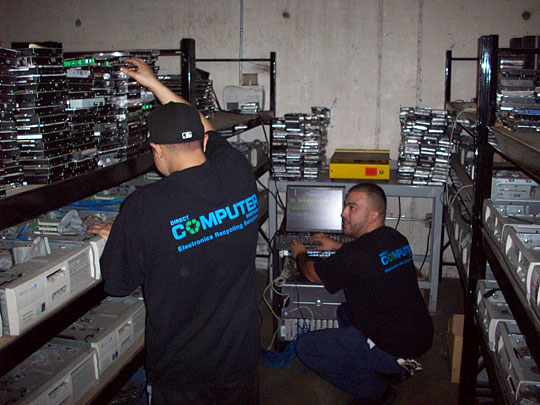 Technicians at work in the hard drive wiping station at Direct Computer Disposal in Los Angeles. The company uses software used by the Department of Defense to erase every hard drive that comes into its facility.

Read the All Tech Considered blog for tips on how to wipe out the contents of your hard drive.

Heather Armstrong lives in a nice house in Salt Lake City with her husband, Jon, one daughter — with another on the way — and two dogs. In the house, Armstrong wrote on her blog dooce.com, is a closet full of old computers.

Jon Armstrong had been holding on to the computers so he could take work off of them.

"But we can't even get on to the hard drives anymore because it doesn't work with the monitors," Heather Armstrong says. "We've just waited too long, and the technology has gotten ahead of us."

The Armstrongs want to recycle their computers, but Heather has some things on her old PC that she would rather not have other people see.

"It was the computer I was using when he and I started instant messaging each other every night," she says. "And oooooooh dear, how embarrassing that would be if anybody were to find those!"

Jon Armstrong admits he is a little paranoid about handing his old computers over to a recycling center.

"I definitely don't trust them with the hard drive," he says. "I don't trust that they'll do anything to ensure that my data is erased."

Jon Armstrong knows how to reformat the old Macintosh computers, but he isn't as familiar with PCs. He is going to try removing the hard drives before recycling, but if he can't he might try more extreme measures.

"I will drill into the drive and just wreak havoc with my drill bit," he says. "Just get a big old drill bit and brrrrrrr, go in and destroy the drive inside the computer."

But there are options for those who take the plunge and take their old computer to a city e-waste disposal site or call the collector to come pick it up.

In Los Angeles, an old computer might end up at Direct Computer Disposal, which calls itself one of the top five computer recyclers in California. It takes in more than 3.5 million pounds of e-waste a month. Some of that comes from companies such as Google, Dell, US Bank and Cal National Bank.

First the computer dismantlers take apart the CPUs, the plastic, the memory chips and the power supplies. Each component gets put in a bin, and the hard drives go to Carlos Salgado, who wipes 300 to 500 hard drives a week.

"We'll take it to our wiping station. We'll run a program such as WipeDrive," Salgado says. "And in this program, we have options to delete information from here. Once it's wiped, it'll test it for us to make sure, you know, it's consistent, it works."

Leon Avedikian, who handles sales and marketing for the company, says the company uses software also used by the Department of Defense.

"So we do complete wiping of the hard drives. It brings everything down to zeros. And at the end of the day, we take the hard drives and we run them through a shredding machine," Avedikian says. "We have a shredder in our Northern California facility. All the byproducts go in there for complete shredding."

Avedikian says the shredded computer parts are all sold to downstream vendors. Not every recycling company shreds the hard drives it collects, he says. Some send computer parts to landfills, resell them or ship them overseas.

"It's a very, very big industry, and unfortunately some recyclers out there try to find the easy way out — for the quick cash, we call it," he says. "But that's their type of business. But we do everything in an environmentally safe way."