Accessibility links
K'Naan: Hip-Hop's New Pop 'Troubadour' The second album by Somalia-born Canadian alt-rapper K'Naan finds the artist embracing a swing-infused bent, complete with Ethiopian samples and strong hooks. Troubadour fits alongside the best pop efforts of Lil Wayne and T.I., with music that stays in your head for days. 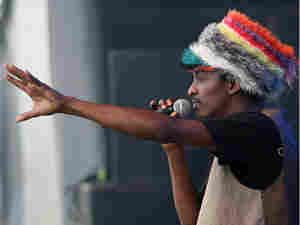 Somalia-born rapper K'Naan has an unusual background. He comes from a distinguished family — his father an intellectual, his grandfather a poet, his aunt a famed singer. He didn't get to Canada until he was 13, when he escaped Mogadishu with his mother and older brother. Inspired by an Eric B & Rakim CD mailed to him by his father (who was driving a cab in New York City), K'Naan was rapping phonetically before he had left Somalia or learned English. But now that he's in North America, he raps his own way.

In keeping with his regional traditions, K'Naan's rhythms are more straightforward than those of American hip-hop or sub-Saharan Afropop. They're often driven by Ethiopian samples that are more swing than funk. And his second album, Troubadour, doesn't just have content — it's as catchy as the best works of Lil Wayne or T.I.

Click the link above to hear the full review. 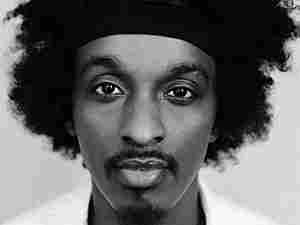 News from Somalia usually involves violent warlords, or pirates hijacking ships off the coast. Other than that, average Somalis don't have much of a voice. But a rapper from Somalia named K'Naan is trying to change that, and in the world of hip-hop, he's become an artist to watch.

K'Naan grew up in Mogadishu, on what he calls "the meanest streets in the universe." In one song on his new album, he calls his hometown the "risky zone," full of pistols and Russian revolvers.

"The song's called 'ABCs,' " K'Naan says. "And it's about how being born in a certain place changes everything, your destiny. I got the kids choir singing, 'They don't teach us the ABCs / We play on the hard concrete,' and for us, that is very true."

Somalia is one of the poorest and most violent countries in the world. Malnutrition and clan warfare are rampant. According to Amnesty International, some 6,000 civilians were killed in fighting in 2007 alone. K'Naan says he wants to use his music to raise consciousness about what's happening there.

"The people of Somalia just do not have a voice," he says. "They are to me the most forgotten people in the world."

The rapper left Somalia as a teenager in 1991 with his mother and older brother. The country was in a civil war involving multiple fighting factions.

"Mogadishu was burning. The government is falling," he says. "And all the embassies are packing out, and my mother is able to get visas to the U.S."

His family eventually settled in Toronto. Eighteen years later, K'Naan is establishing his name in Canadian and American hip-hop. His first album, 2006's The Dusty Foot Philosopher, was a hit with critics here and abroad. His latest, Troubadour, features Mos Def and Damian Marley. The L.A. Times recently listed K'Naan as an artist to watch in 2009, while The Guardian called him "powerfully low-key, theatrical [and] witty."

K'Naan writes in a variety of music styles. But before he moved to North America — before he spoke any English — his first love was American rap.

"I came to the door / I said it before / I never let the mic magnetize me no more," K'Naan raps, before saying, "That was Eric B and Rakim [from] Paid in Full. I used to say it just like that. But, of course, I didn't know what 'door' meant."

K'Naan could not be mistaken for an American rapper: For one thing, he has a kind of vintage Bohemian look. He says he doesn't think that American rap has much credibility, because even the toughest American neighborhoods aren't nearly as dangerous as Mogadishu.

"Where rocket-propelled grenades are fired around you on a daily ... a guy bragging on TV talking about how gangster he is?" K'Naan says. "For us, it's more a source of entertainment. It's more like a comedy or something we watch. Say, 'Oh wow, that's kind of cute of American gangsters.' But it isn't hardcore, it isn't that bad. Let's get things in perspective, you know?"

Lately, K'Naan has been talking about the Somali pirates who've been hijacking ships from Western countries off the Somali coast. Because, he says, there's more to that story, too.