Accessibility links
A New Way To Patrol The Texas Border: Virtually Texas sheriffs have erected surveillance cameras along the border with Mexico and connected them to the Internet, inviting people to help catch drug smugglers and illegal immigrants. Since November, more than 43,000 people have signed up as online monitors for the controversial program. 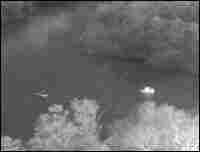 A video on blueservo.net shows Texan law enforcement driving a raft on the Rio Grande away from the U.S. border. According to the site, a "Virtual Texas Deputy" spotted the raft. blueservo.net hide caption 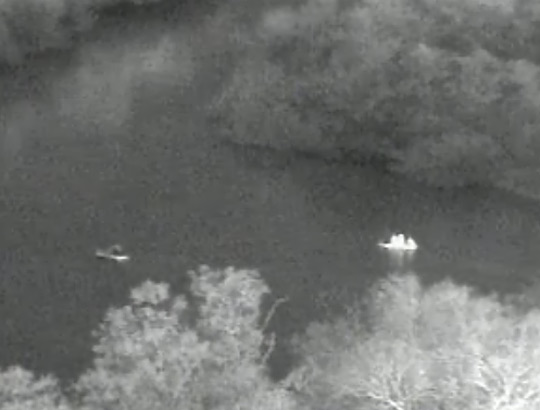 A video on blueservo.net shows Texan law enforcement driving a raft on the Rio Grande away from the U.S. border. According to the site, a "Virtual Texas Deputy" spotted the raft.

In a controversial program aimed at enhancing border security, Texas sheriffs have erected a series of surveillance cameras along the Rio Grande and connected them to the Internet.

Thousands of people are now virtual Border Patrol agents — and they're on the lookout for drug smugglers and illegal immigrants.

Robert Fahrenkamp, a truck driver in South Texas, is one of them.

After a long haul behind the wheel of a Peterbilt tractor-trailer, he comes home, sets his 6-foot-6-inch, 250-pound frame in front of his computer, pops a Red Bull, turns on some Black Sabbath or Steppenwolf, logs in to www.blueservo.net — and starts protecting his country.

"This gives me a little edge feeling," Fahrenkamp says, "like I'm doing something for law enforcement as well as for our own country."

Online border patrolling is about as sexy as real-life police work — hours of tedium punctuated by minutes of high excitement.

On Blueservo's Web site, each camera focuses on an area that's known for illegal crossing. Next to a real-time view of a grassy meadow is the message: "Look for individuals on foot carrying backpacks." A shot of a border highway says, "If you see movement from the right to the left, please report this activity."

When a citizen spots suspicious activity, they click a button on the Web site and write a report. That message goes to the corresponding sheriff's office. The sheriff may handle the problem or call the U.S. Border Patrol.

To date, more than 43,000 people have logged on and become, as the Web site calls them, "virtual Texas deputies."

Donald Reay, executive director of the Texas Border Sheriff's Coalition, says most of the virtual deputies are in Texas, though some are as far away as Australia.

"They said in good Australian fashion, 'Hey, mate, we've been watching your border for you from the pub in Australia,'" Reay recalls.

Since the program started in November, virtual deputies have yielded four marijuana busts, totaling more than 1,500 pounds, and 30 incidents when illegal crossers were repelled.

The Texas governor's criminal justice office funds the program, and it will spend $2 million in its first year.

But there is political opposition, including from state Sen. Elliot Shapleigh (D-El Paso), who calls it a "waste of money." He says border protection should be left to the government. The border cameras "invite extremists to participate in virtual immigrant hunts," he says.

"If they want to call that being a vigilante for reporting people illegally crossing the border, then so be it," Parker says.

Officially, the U.S. Border Patrol has no comment about the placement of surveillance cameras on private property along the international river. Privately, an unnamed veteran agent in South Texas said he's dubious of the program.

But effective or not, more than 43,000 pairs of eyes are watching the Texas-Mexico border through blueservo.net.