Accessibility links
Violence In Iraq Takes A Political Turn Samir Safwat al-Hadithi, a 60-year-old lawyer and politician, was the victim of unknown gunmen who had apparently been lying in wait. He became the third member of his political party to be assassinated in a month in killings that seem to mark a new chapter in Iraq's struggle for stability. 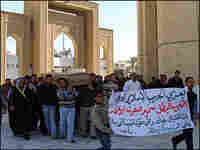 Samir Safwat al-Hadithi left the gate of his Baghdad home, on a quiet street behind the Ferdaws mosque. There was a rattle of gunfire and, in seconds, he was dead.

Hadithi was the victim of unknown gunmen who had apparently been lying in wait. A 60-year-old lawyer and politician, he became the third member of his political party to be assassinated in a month.

The killings seem to mark a new chapter in Iraq's struggle for stability, a move away from insurgent and sectarian violence to deadly political infighting.

Iraq enjoyed a relatively peaceful election in January, choosing new members for the provincial councils that are roughly equivalent to American state legislatures. But the peace since the voting has been marred by a series of assassinations targeting members of the Iraqi Islamic Party, a Sunni Muslim group that grew out of the Muslim Brotherhood.

According to Islamic tradition, Hadithi's funeral was held quickly, in the mosque whose dome and minarets dominated his neighborhood. Men from his family and party gathered in the echoing hall, exchanging quiet greetings and blessings as a cleric intoned verses from the Quran. They stirred small, potent cups of coffee as they talked about the dead man.

"He was one of the true men of reconciliation," Hadithi says. "From time-to-time, he used to hold meetings in his house, bringing the Sunnis, Shiites and Kurds together to talk about Iraqi unity."

Maher Hadithi, who is Iraq's culture minister, is not willing to accuse anyone specifically in his cousin's murder. He insists that Samir Hadithi had no personal enemies but, he says ruefully, "All the good people are targeted."

Ahmed Abyadh, a political analyst in Baghdad, says the Islamic Party has been a target of sectarian violence in the past, but that he believes the latest attacks are political — suggesting that Hadithi was killed by Sunni rivals. He says the provincial elections showed that parties like the Islamic Party can no longer claim to be the main representatives of one sect or another, so now they're struggling for power among themselves.

Abyadh also suggests that foreign powers, such as Iran or Syria, may have a hand in trying to shift political influence to their surrogates in Iraq.

It's not clear why Hadithi would specifically have been targeted. His Islamic Party lost strength in the provincial elections, especially in Iraq's western Anbar province, where they fell behind Sunni tribal groups and a moderate secular party. His wife, Basima al-Hadithi, lost in her bid for a seat on Baghdad's provincial council.

Another of Hadithi's relatives, Sheikh Muhammad Hussein al-Bayati, had tears in his eyes as he spoke of the slain man.

"I'm asking the government of Iraq and particularly the Ministry of Interior," he says, "to hit these criminal gangs with an iron hand."

During the service for Hadithi, the courtyard of the mosque was lined with armored cars, flanked by gun-toting security men, most of them there to protect the culture minister. More solemn men filed into the funeral hall. Except for the amplified funeral readings from the Quran, the neighborhood was quiet.

Samir Safwat al-Hadithi is survived by his wife, a son and four daughters.