Accessibility links
Weathering The Times: Stimulus Boosts Green Jobs Companies that weatherize homes and commercial buildings will be among the first to feel the benefits of the new federal stimulus money. The government's idea is to save energy, create jobs — and even perhaps slow global warming. 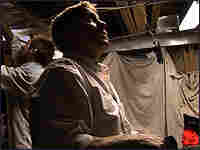 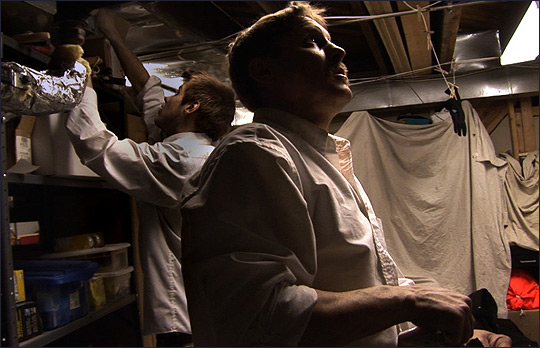 The stimulus funds should boost business for people like Bob Logston. His company, Home Energy Loss Professionals, retrofits homes to save energy and money.

Check out tips from the Maryland Energy Administration for saving energy and money by weatherizing your home.

Learn more about getting financial assistance to weatherize your home from the U.S. Department of Energy. 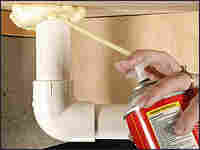 People in the business of weatherizing homes are expecting to profit from the new economic stimulus plan. The federal aid package sets aside $5 billion worth of spending for making homes and buildings more energy efficient. The idea is to save energy, create jobs — and even perhaps slow global warming.

That's good news for people like Malcolm Woolf, who runs the Maryland Energy Administration. It's a small office with a small staff, and they've started a new program to train people in need of work how to weatherize homes, such as installing weatherstripping around doors, insulating attics and basements, or making heating and cooling systems more efficient.

"We are training folks every week to become home energy retrofit professionals," says Woolf. "Construction workers can be easily retooled to be air-duct or insulation installers and meet our current needs."

Maryland has also spent hundreds of thousands of dollars over the past 10 months helping low- and moderate-income homeowners pay for retrofitting. The state's energy department will pay up to $5,000 for qualified families to weatherize.

Woolf expects the federal stimulus package to boost his budget tenfold. That means new work for Bob Logston, whose company, Home Energy Loss Professionals, does a lot of the Maryland program's retrofit work.

New homeowner Princess Moorman is one of about 50 Marylanders who has qualified for retrofitting for her north Baltimore three-story house. It was built in the 1920s, and although it's been renovated, it's drafty. Moorman says her January heating bill was $500.

Logston and his three-man crew recently spent a day going over Moorman's house. By running a big exhaust fan that pulls air out of the house, they create a low-pressure zone inside that draws cold air into the house through cracks and holes. They locate where the cold air is being sucked in by using an infrared scanner that spots cold areas. The culprit in Moorman's house is the ductwork that carries air up from the basement heating system, but it's bringing 50-degree basement air with it.

Logston's team spent a day painting wet cement on the ducts to help them retain heat, and wrapping the water heater and pipes with insulation.

"It's not high-tech," says technician Mike Shifflett, "but it makes a big difference." He says it might take six months to train someone from the building trades to do energy audits and retrofits.

The work at Moorman's Baltimore home will run about $4,500. The Maryland Energy Administration says the average retrofit they pay for saves about $400 to $500 a year on home energy costs. That means about a 10-year period to recoup the upfront expense.