Accessibility links
Obama's Challenge: Honest Economic Hope President Obama hasn't minced words about the dire state of the U.S. economy. But he's being urged to take a more optimistic tone in his first address to a joint session of Congress on Tuesday night, as Americans grow increasingly alarmed about their financial security. 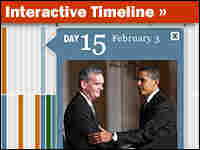 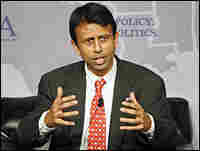 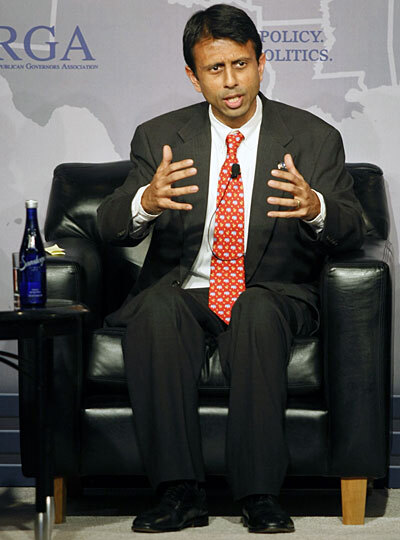 Louisiana Gov. Bobby Jindal's selection to deliver the Republican response to President Obama's first address to Congress and his elevated national profile have people wondering if he's being primed for his own White House bid in 2012.

President Obama has consistently pledged to be honest with the American people about the state of the union.

Since his inauguration five weeks ago, the new president has painted an unstintingly dire portrait of a nation in economic crisis.

From his meetings in recent days with the nation's mayors and governors to his travels to hard-hit East Peoria, Ill., and Fort Myers, Fla., Obama has sternly lectured leaders about accountability and warned about more bad times to come.

But as he prepares for his first address to a joint session of Congress on Tuesday night, Obama has been urged by many — including former President Bill Clinton — to take a more optimistic tone during what could be the most important speech of his short political career.

For some, like historian William Leuchtenburg and rhetoric expert Amos Kiewe, that means taking a page from President Franklin Delano Roosevelt.

"It's true that things aren't that good," says Kiewe, who has written about FDR and the reassuring rhetoric he offered up to distressed Americans during his Great Depression-era fireside radio chats.

Indeed, like FDR, Obama has been buffeted by unrelentingly terrible economic news: from the domestic front to the ongoing cost of wars in Afghanistan and Iraq to the developing global economic crisis.

In the face of such an onslaught, Obama is not expected to sugarcoat the long road to recovery in his speech. But aides say it will contain a stamp of optimism — something many see as mandatory as Americans grow increasingly alarmed about their short- and long-term financial security.

"President Obama needs to instill hope and optimism," Kiewe says — the way FDR did with the "together we can't fail" message woven through his discourses, along with nuts and bolts policy information.

"There is a noneconomic entity in economic behavior — and that is the need for hope, the need to believe in the system, even though that's a difficult thing when each day, we get bad economic news," said Kiewe, a rhetoric expert and author of FDR's First Fireside Chat: Public Confidence and the Banking Crisis.

Even FDR himself warned in a fireside chat that "we can't ballyhoo ourselves back to prosperity." Still, a little all-American, can-do uplift from the bully pulpit may be needed, the historians say, at a time when nearly three-quarters of Americans say they are scared about the state of the nation's economy, according to a new CNN/Opinion Research Corp. poll.

Says Leuchtenburg, a leading FDR scholar: "Roosevelt did not get the country out of a depression for many years, but there was an extraordinary recovery of confidence" in the nation's ability to move toward better days.

Obama's speech is not officially a State of the Union address, but it's pretty darn close.

The president is expected to talk about the nearly trillion dollars in economic stimulus money that is already making its way to the states. He will also very likely discuss his $275 billion plan to help up to 9 million homeowners avoid foreclosure, as well as his new budget blueprint and its focus on health care, energy and education.

That 2009-2010 blueprint, which will be released Thursday and finalized in April, would, Obama says, reduce the nation's ballooning deficit by ending tax breaks for the wealthy and bringing home American combat troops from Iraq.

If Obama's comments Monday at the White House during his "fiscal responsibility summit" are any indication, the president may use his speech to direct blame for the nation's skyrocketing deficit to the Bush administration's accounting methods. The Bush budget did not include war costs, which were covered through supplemental funding requests to Congress.

On Monday, Obama referred to that practice, intended to make the nation's deficit appear smaller, as part of President Bush's "casual dishonesty of hiding irresponsible spending with clever accounting tricks." He said the full cost of the two wars would be reflected in his proposed spending plan.

"We do ourselves no favors by hiding the truth about what we spend," Obama said.

Louisiana Gov. Bobby Jindal, considered a rising star in the Republican Party, is scheduled to deliver the GOP response. Jindal is among a handful of Southern Republican governors — all with White House ambitions — who have said they will refuse some of the president's stimulus money.

Jindal used his appearance Sunday on NBC's Meet the Press to criticize the stimulus as partisan, and he suggested that it's time for conservatives to create better solutions.

"The Republican Party has got to offer conservative alternative solutions," Jindal said — a theme he is expected to reprise Tuesday night. "I think our obligation is to work with the president every chance we can, to be bipartisan. But on principle, when we disagree with him, we should be unafraid to stand up on principle and to point out our alternative solutions."

Returning To 'Yes, We Can'

Armed with Democratic majorities in the House and Senate, Obama has already set into motion the wheels of his recovery plan: He got Congress to pass his nearly trillion-dollar economic stimulus package; announced his plan to help stem the foreclosure tide; released more money to troubled banks; and scolded overcompensated Wall Street titans.

As important as it is for Obama to continue to sell the American people and Congress on his economic plan and to push back at Republican opposition, it will be the president's main task Tuesday night, Leuchtenburg says, to use his demonstrated oratorical skills to recapture the forward-looking, "yes, we can" attitude of his campaign.

"I would think that he might very well return to those three words," says Leuchtenburg, author of Franklin D. Roosevelt and the New Deal: 1932-1940.

Kiewe says that Obama has erred in allowing less eloquent members of his team to carry his economic message at times — most notably Treasury Secretary Timothy Geithner. But the address to Congress provides the president an opportunity to cement himself as the country's chief spokesman and to pronounce himself encouraged by the ongoing support of a strong majority of the American public.

So while the nuts and bolts of his economic plans are important, no less important will be the president's ability to use his prowess as a campaigner to reassure and summon the myth of American history — "our enthusiasm, our hope, and, yes, our audacity," says Kiewe.