Accessibility links
Al-Jazeera English Struggles For U.S. Audience Al-Jazeera English, the 24-hour satellite news channel, has been effectively shut out of the world's most important English-language market. Now, with strong financial backing, it is vying to get picked up by U.S. television carriers. 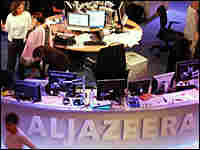 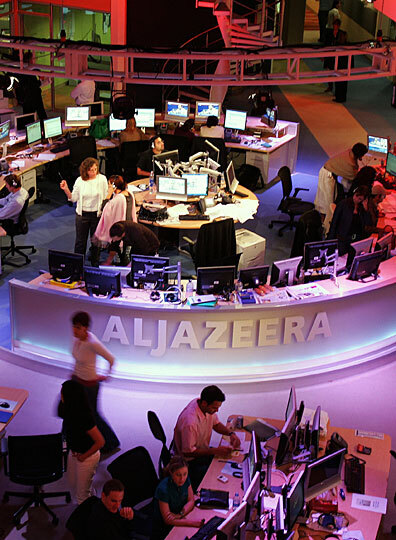 The newsroom of the Doha, Qatar-based Al-Jazeera satellite news channel on Nov. 14, 2006, one day before Al-Jazeera English launched.

"We reported live from the bar, but it meant having police snipers on top of the buildings, undercover cops around me," Rushing recalls. "I'm delighted [the biker gangs] were so politically active, but who knew they were so pro-establishment?"

The Al-Jazeera networks are backed by the riches of the ruling family of Qatar. The original Doha-based Arabic language channel is known in the Middle East for airing views that are independent of regimes in the region. But after the attacks of Sept. 11, 2001, some U.S. officials accused Al-Jazeera Arabic of being an arm of al-Qaida for running videotaped statements from Osama bin Laden and his aides.

The visceral reaction among many Americans to the Al-Jazeera brand helps explain why, more than two years after its launch, the 24-hour English-language satellite news channel has been effectively shut out of the world's most important English-language market. In the U.S., it's available in just a few spots, including Toledo, Ohio, and Burlington, Vt. But the TV channel is fighting to get in front of American and Canadian audiences.

"We challenge both of those notions," says Burman, who was editor-in-chief of the Canadian Broadcasting Corp. for eight years before taking the post at Al-Jazeera English.

While actual ratings are hard to come by, Al-Jazeera English can be watched in more than 130 million households worldwide and is increasingly part of an international conversation, as its staff reports on and for people all across the globe. Executives say they hope to drum up public awareness and appetite here with an advertising campaign and a Web site: IwantAJE.com.

Among journalists, Al-Jazeera English has won some respect. Tony Maddox, executive vice president and managing director of CNN International, says his staff closely monitors Al-Jazeera English, along with the BBC and Sky News.

"They were serious in intent, and they've invested in a very sizable international infrastructure," Maddox said, "So their presence has been felt from an editorial point of view and certainly, within the industry, there's a significant awareness of them."

Yet there has been little hunger expressed by viewers — and therefore little pressure on cable and satellite TV providers to carry Al-Jazeera English.

Officials at the nation's two largest cable providers have signaled that nothing is in the works. "Our customers consistently tell us they want more movies, sports, music and TV show choices," Comcast spokeswoman Jennifer Allen wrote in an e-mail. Note that there was no mention of international news, especially from Doha.

"We don't think about them any differently than we do any other programmer," Dudley says. "Is there demand for the product — and is there a financial arrangement that we can get comfortable with?"

Asked whether Time Warner customers had been calling for Al-Jazeera English to be added to the dial, Dudley says: "They're not on, so not enough to make all of it come together just yet. But that doesn't mean anything for going forward."

Burman of Al-Jazeera English says he is hopeful the new campaign will help. He says there are deals in the works with cable providers in Canada and the Northeastern U.S.

But Al-Jazeera English has experienced some growing pains. Former Nightline correspondent Dave Marash was one of the channel's biggest hires — but he quit a year ago, complaining that British news executives at the network relied on lazy stereotypes about the U.S. for story assignments.

Some of those executives are now gone.

The network's stories are valuable because they focus on how the news directly affects ordinary people around the world, said University of Michigan history professor Juan Cole, author of the upcoming book Engaging the Muslim World.

Cole says that when he watches CNN or MSNBC, he can watch all day and hear nothing about the conflict in Afghanistan.

"Well, we've got tens of thousands of troops there," Cole says. "A war is going on. I mean, they're being killed. It's odd that there's so little media attention in the United States to Afghanistan."

Burman and others at the channel say it turned the corner this winter, during its coverage of the Israeli siege of Hamas-controlled Gaza. Al-Jazeera English was the only English-language news outlet fully able to broadcast stories from inside the territory. Online traffic for Al-Jazeera English's stories at livestation.com shot up sixfold. And more than half its online viewership on its own Web site comes from North America.

But Zelnick says he found many of the Gaza stories he saw by Al-Jazeera English to be somewhat one-sided and emotional.

"I can appreciate the Israelis' complaint that Al-Jazeera went out of its way to broadcast gory details of what was, of course, a difficult battle," Zelnick says.

Maddox of CNN International says he was impressed that Al-Jazeera journalists were in Gaza, but he questions how many stories they told were memorable.

Burman rejects both critiques, saying his network was the only English-language broadcaster presenting vivid stories from both sides of the conflict. His journalists struggled at times to tell equally visceral stories in Israel, he said, because the casualties were so much greater among Palestinians in Gaza.

People will come to trust and appreciate Al-Jazeera English once they've seen it, Burman says. But the network's fate in the U.S. remains trapped in a bit of a paradox. It won't get carried by cable providers unless viewers demand it. And as Burman acknowledged, people won't demand it unless they've caught a glimpse of it first.