Accessibility links
Stimulus Puts High-Speed Rail On The Fast Track Among the winners in the $787 billion stimulus package that President Obama signed into law last week are backers of high-speed rail. Transportation Secretary Ray LaHood says high-speed rail could be a signature issue for President Obama. 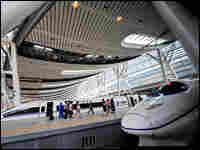 Visitors walk past bullet trains at a station in Beijing. China is one of many countries that makes use of high-speed rail. Teh Eng Koon/AFP/Getty Images hide caption 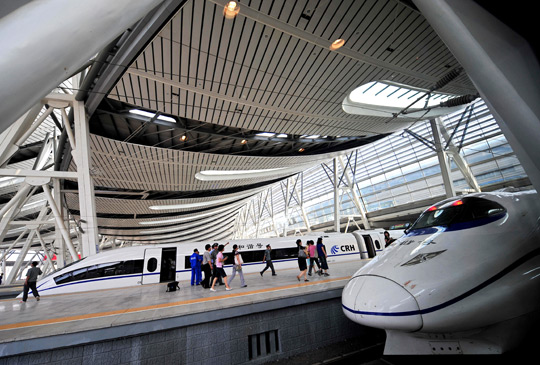 Visitors walk past bullet trains at a station in Beijing. China is one of many countries that makes use of high-speed rail.

Among the winners in the $787 billion stimulus package that President Obama signed into law last week are backers of high-speed rail. The legislation included $8 billion for fast trains in the U.S. — the most ever allocated for rail at one time.

Transportation Secretary Ray LaHood says high-speed rail could be a signature issue for Obama. "I do think this is the transformational issue for this administration when it comes to transportation," LaHood said. "I think President Obama would like to be known as the high-speed rail president, and I think he can be."

LaHood has sent Obama a memo outlining a half-dozen rail corridors across the country that could be in line to get some of the high-speed rail money.

The state that may be furthest along in planning is California, where voters approved a $9 billion bond issue last fall for high speed trains. Quentin Kopp, a former judge who is chairman of the California High-Speed Rail Authority, expects a lot of the federal money to wind up in the California system, which would link the state's largest cities.

"A trip from San Francisco to Los Angeles, which is about 410, 420 miles, will take two hours and 38 minutes with a one-way fare of $55," Kopp says. That's about half to one-third the cost of a plane ticket for a comparable trip.

Illinois, the home state of both Obama and LaHood, also will likely get a large chunk of federal funds. Chicago is already a major rail hub for the region and the nation. Rick Harnish, executive director of the Midwest High Speed Rail Association, an advocacy group, says his region could use the money to improve and speed existing service.

"What we're hoping the stimulus money gets used for is upgrading the existing route between Chicago to St. Louis, to get the trip down to three-and-a-half or four hours," Harnish said. He also hopes to start the engineering work for "a true high-speed line that would bring that service down to two hours."

High-speed rail advocates also would like to see service between Chicago and Minneapolis. And planners in Texas, Florida and Ohio say lines would work to connect their population centers.

The closest approximation to high-speed rail in the U.S. is currently Amtrak's Acela service, running from Washington, D.C., to New York and north to Boston. The trip to New York is supposed to take 2 hours and 46 minutes, averaging 86 miles per hour. That's about half the speed of France's TGV trains.

Joe Vranich, who has written several books on high-speed rail, says the most effective use of the stimulus money would be to build what he calls a truly high-speed line between Washington and New York.

"That's the place where we clearly need such trains the most," Vranich said.

He jokes that if he were "king of high speed rail," he would beef up Acela service "to the levels we see in France or Japan. And once we've demonstrated what a real high-speed rail system can do, hopefully we can diminish these foolish calls for feeble high-speed rail in the other parts of the country and do this job the right way."

But political realities most likely will mean the $8 billion will be divided among several train corridors, diluting the impact somewhat. But there may be more good news for fast-train backers: Obama is expected to seek an additional $1 billion for high-speed rail in his outline for the 2010 budget later this week.