Accessibility links
A Defining Moment For Jindal — And GOP's Future? Louisiana Gov. Bobby Jindal's selection to deliver the Republican response to President Obama's first address to Congress and his elevated national profile have people wondering if he's being primed for his own White House bid in 2012. But some experts say the exposure is too much, too soon.

Listen
A Defining Moment For Jindal — And GOP's Future? 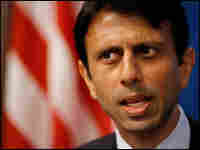 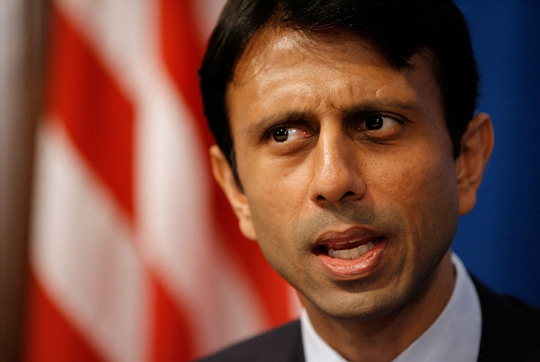 Louisiana Gov. Bobby Jindal prepares to address the National Press Club on May 2, 2008, in Washington, D.C.

President Obama hasn't minced words about the dire state of the U.S. economy. But he's being urged to take a more optimistic tone in his first address to a joint session of Congress on Tuesday night, as Americans grow increasingly alarmed about their financial security.

President Obama will take center stage Tuesday evening when he delivers his first address before a joint session of Congress. After the speech and the cheers and the handshakes on the way out the door, Republicans will get their turn. The man chosen to give their response: Louisiana Gov. Bobby Jindal.

The first-term governor is a rising star in the national GOP who is increasingly popping up on talk shows and at events outside his state. That's leading to speculation that Jindal, 37, is being urged to run for the presidency.

On Sunday, he appeared on NBC's Meet the Press, plotting a future for the national party.

"Look, our Republican party got fired with cause these last two election cycles. We became the party that defended spending, corruption that we never should've tolerated, and we stopped offering relevant solutions to the problems that Americans care about," Jindal said. "I think now is the time and it's a great opportunity for Republican governors and other leaders to offer conservative-based solutions to the problems."

Jindal was the first governor to reject a portion of the president's stimulus package, $90 million in unemployment benefits, because he said it would have led to increased business taxes.

"Certainly, I think this could've been a very different stimulus bill written, truly targeted at infrastructure, focused on the kinds of tax credits that get investments moving in private sector," Jindal said Monday on the lawn of the White House.

'A Tougher Road Comin' Ahead'

Remarkably, the governor's honeymoon is still going after his first year on the burlesque stage of Louisiana politics. Jindal gets high marks for his ethics reforms, his take-charge response to Hurricane Gustav last fall, and his ability to connect with everyone from Cajun oystermen to north Louisiana peach growers. But he's not a populist.

In his state, he's an exotic: An Indian-American who is a devout Catholic and a Rhodes scholar, Jindal reflects the academic bent of his mother and father, rather than the bloodline of Louisiana politicians or planters.

While his first year in office has been smooth, that's about to change. Louisiana is facing a $2 billion deficit, and cuts to higher education and health care appear inevitable, says John Maginnis, a veteran political watcher in Baton Rouge.

"It's gonna be a tougher road comin' ahead," Maginnis says. "The legislators are feeling more independent, resources are tighter, there's gonna be more questions about how the money is spent. Yeah, it should be a lot more difficult."

Nationally, Jindal has nearly everything the Republicans need after their electoral thrashing this fall: He's young, he's a person of color, he's a fresh face, he's religious, he's popular back home.

He also was on Sen. John McCain's short list of running mates.

In November, Jindal went to Iowa — the nation's first caucus state — to speak to Christian conservatives, pumping up speculation that he may run for the Republican presidential nomination in 2012.

But with Jindal clearly the flavor du jour of the GOP, is it too much, too early?

Roy Fletcher, who has been advising both Democratic and Republican candidates in Louisiana for 30 years, thinks that may be the case.

"Anybody right now that's out there runnin' — or ... who appears to be running for president is askin' to get their head knocked off," Fletcher says. "It's too early."

As for Jindal's TV appearance Tuesday night, Louisiana will be delighted to have its governor in the national spotlight. Even people who didn't vote for him are pleased, Maginnis says.

"I mean, the last time a Louisiana governor had anywhere near so large a national stage, it was on the front steps of a federal courthouse when Edwin Edwards had just been convicted of racketeering," he says. "So this is whole different look for a Louisiana governor."

And after Jindal delivers the Republican response, no doubt the pollsters will be quietly testing the electorate to see if the nation likes him as much as Louisiana does.