Accessibility links
'Black Thoughts' With Comedian Larry Wilmore As senior black correspondent for The Daily Show, Larry Wilmore's used to being politically incorrect for the sake of humor. In his new book, I'd Rather We Got Casinos, he mines black culture — beyond politics — for comedy. 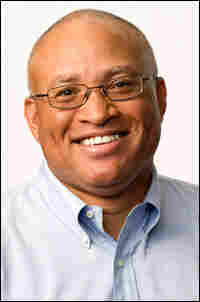 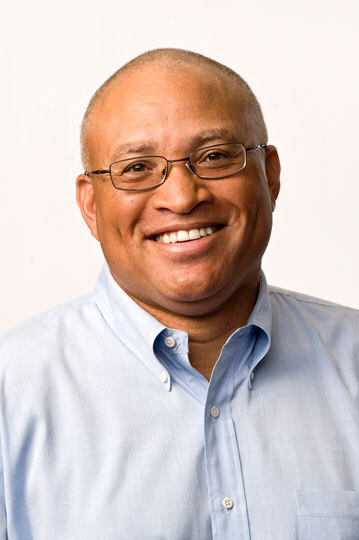 Comedian Larry Wilmore won an Emmy Award for his work on The Bernie Mac Show.

As senior black correspondent for The Daily Show, Larry Wilmore's used to being politically incorrect for the sake of humor.

In his new book, I'd Rather We Got Casinos, he mines black culture — beyond politics — for comedy. In more than 25 bits, Wilmore imagines "Text Messages from a Birmingham Jail," muses on black weathermen, pens five letters to the NAACP, and eulogizes "the 'N' Word."

Wilmore has numerous comedy credits to his name. He created The Bernie Mac Show, and co-created The PJs. He has also performed and written for the U.S. version of The Office.

Excerpt: 'I'd Rather We Got Casinos' 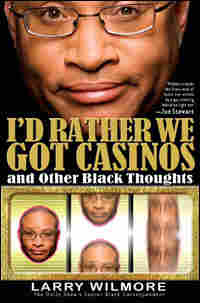 On April 16, 1987, in a small rural town on the outskirts of Mariposa County, California, a small band of UFOs was seen by 99.9 percent of the residents in the balmy night sky. They were able to faithfully recall the shape and movements of the mysterious crafts with incredible uniformity. "A cluster of small silent black triangles flying in formation" was the way most of them put it. The local news reported the event, the townspeople discussed it daily for nearly a year, and even a few major newspapers covered the story. Most were impressed by the clarity of the recollections. Some were blown away by the grainy amateur video. A few were taken by the astounding 99.9 percent close encounter rate. I was more interested in the .1 percent that didn't see the UFO. That .1 percent was named Clerow Mims: the only black resident of the city.

How come brothas don't see UFOs? I have asked this question for the last thirty years and have yet to stumble upon any satisfactory answer. UFOs have been sighted almost everywhere on earth for the last sixty years and I can't recall even one sighting by a brotha. How is this possible? Is it a conspiracy on the part of the UFOs? Are aliens racist? Or is it something about brothas themselves that don't allow them to have this experience? After numerous interviews with experts and exhaustive research, I've arrived at a few possible theories.

Brothas automatically block out anything or anybody that might want to take them for a ride on a ship for an indeterminate amount of time.

Many ufologists have theorized that we are able to see aliens because of a light signal that is emitted from the ship and is reflected off our skin. This makes them visible to the human eye. Unfortunately, blacks have an abundance of melanin in their skin, which acts like stealth technology and absorbs the signal, rendering UFOs invisible.

The upside of this phenomenon is that light-skinned brothas might have a better chance of seeing aliens than dark-skinned.

Brothas could be afraid to report UFO sightings for fear of losing street cred. Street cred is hard to come by. Many times you have to get shot to obtain a decent amount of street cred. Would you really want all of that erased just because you saw something that you can't explain flying in the sky? I don't think so.

Most people think if aliens arrived on earth, they would take over and rule us all. In other words, they would become the Man. That's all brothas need, so what's the point? They may as well have spotted a cop.

It's Not a Big Enough Conspiracy

Alien life, as a conspiracy theory, is nothing compared to some of the shit brothas come up with. In fact, some black liberationist religions teach that white people are aliens who inhabited the earth thousands of years ago (I'm not making this up).

Brothas Are Just That Unlucky

Most brothas accept this theory and chalk it up to the same odds they have of winning the lottery: slim to none.

Not a bad theory. It would explain a lot.

Brothas Are Afraid of Aliens

Some aliens have been called snake people for their reptilian-like features. Everybody knows brothas are afraid of snakes, so this theory carries a high degree of probablility.

It's a Government Conspiracy

It's possible that brothas have seen UFOs and have reported them but the government, for whatever reason, has covered it up. It's not too far fetched. The government is already covering up the existence of aliens, why wouldn't they cover up the record of brothas reporting their existence?

Though all of these theories are legitimate, it's the last one that intrigues me the most. What if there is a governmental cover-up at work? What if there are fantastic stories of brothas and UFOs that the government just didn't want us to know about? I don't know if these questions can ever be answered satisfactorily. But one thing is for sure, if brothas have seen strange lights in the sky that were not police helicopters, I'm going to make sure the world knows.

From I'd Rather We Got Casinos ... and Other Black Thoughts by Larry Wilmore. Copyright (c) 2009 Hearthstone Productions, Inc. Published by Hyperion. All Rights Reserved.