Accessibility links
Who's Hiring These Days? The FDIC The FDIC is bringing on hundreds of employees to help cope with increasing bank failures. When a bank collapses, agency employees quietly show up and take over. Some will secure the vaults. Some will audit files. All are told to keep quiet about it. 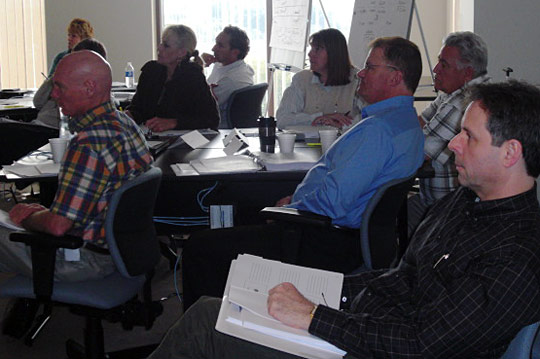 With some banks closing and many others announcing massive layoffs, this is clearly not a good time to find a job in the financial industry. But business is booming for the Federal Deposit Insurance Corp. The government agency insures bank deposits and takes over whenever a bank fails — an almost weekly occurrence these days.

For new FDIC employees gathered recently in Irvine, Calif., it is their fourth day on the job. Six weeks earlier, they might have been selling subprime mortgages. Now they work for the government. Tom Murray, one of the bosses, moves up to the podium and tells the 32 new workers he's glad they've come on board.

"And this is historical, what we're doing here. The part you are playing and the effort that we are doing is integral to helping the economy. The FDIC mission is to ensure the stability of the banking system," Murray says.

That last line, often heard at the FDIC, may seem overwhelming: Welcome to your new job, now all you have to do is ensure the stability of the banking system. No one gets up at the podium and says you are here to help us prepare for the largest number of bank failures in decades.

The problem isn't limited to huge banks — the ones in the news all the time — although a few enormous banks have failed recently. A lot of small banks are failing too, including banks that loaned aggressively to commercial real estate developers. And now that developers aren't paying back those loans, the banks don't have enough money.

Hundreds of new hires are being brought on so the FDIC can be ready to show up and take over when banks collapse. Some workers will secure the vaults. Some will audit files. Some will investigate fraud or malfeasance.

"So some of you may go to a bank closing this weekend. Don't tell your significant other where you're going. Or what you're doing," Murray says. "Everyone knows someone who knows someone. You need to be sure you don't talk in a conversation that could be overheard. Don't check in at the hotel and say, 'Well, I'm here for this event.' You are on a secret mission."

The conference room is quiet. Mouths are slightly open. And then it's computer time. The new hires are told to open their laptops and log in. Type in your user name and then the password: "No Fear."

The woman who handles health insurance pops her head in and reminds the new hires to hurry up and get their paperwork done because who knows where they'll be on Friday.

Bridgett Pukszta, one of the new FDIC employees, used to manage a large commercial and residential real estate portfolio in southern California. "I have assignments coming up pretty quickly, and I'm running around looking for a cable lock for my laptop and passwords aren't up and running, and people aren't entered into the system," she says. "This is a big undertaking."

Two months ago, the FDIC didn't even have an office in Irvine. A couple of months from now, the agency will have a brand new six-story building and 600 new employees who have all been guaranteed long hours, steady work and lots of travel.

Pukszta says, "So I've basically decided to clear off all my weekends and my weeks for the next two months. Basically I've just decided to live with uncertainty."

The last time the FDIC was expanding like this was in the late 1980s, during the savings and loan crisis. Murray, who joined the agency back then, says there are a lot of similarities to that era.

"There's more work than there are people practically to do it," he says. "And back then we had many institutions failing practically every weekend. I was 20 years younger, so it made it a lot easier in that regard. And energy for the job certainly does help."

But nothing trumps experience at the FDIC — especially bank-closing experience. The agency is bringing on a lot of new people, but it's also calling up retirees — people who worked through the late 1980s and early 1990s — and asking them to come back or be on call.

Up on the top floor of the Irvine office, Rick Hoffman, an FDIC associate director, is usually the one making those calls.

"Either you've had experience working for us or you haven't, and you really can't learn how to be an FDIC claims agent anywhere except the FDIC," he says. "There's not a similar function anywhere in the country."

But in a time of crisis, hundreds of new staff, four days of orientation and learning on the job will have to do.

Orientation for the first group of new FDIC hires ended on a Thursday. That Friday, three banks failed. One week later, four more went under.