Accessibility links
Chuck Brown: Go-Go Godfather's Gumbo Go-Go is dance music with beats meant to get bodies moving, and a texture built on the call and response with the crowd. The Go-Go creator, Chuck Brown, has a new CD called We're About the Business. 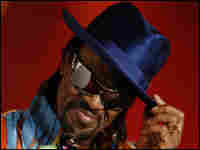 Love Theme [From The Godfather]

Many cities have a signature sound. Detroit has Motown. Memphis has the blues. Nashville has a country twang. The nation's capital — Washington, D.C. — grooves to a sound called Go-Go. Its Godfather is Chuck Brown.

Go-Go is dance music with beats that are meant to get bodies moving. The lyrics and the rhythm are pretty simple — even repetitive. The texture of the music comes from the call and response with the crowd and the blend of a wide range of musical influences like Latin, funk, soul and blues.

Chuck Brown created and popularized this sound some 30 years ago. Brown says his music is like gumbo: a lot of ingredients, no fixed recipe and no two batches are exactly the same.

Still spry and more stylish than men half his age, 71-year-old Chuck Brown has a new CD called We're About the Business.

This streaming audio performance is a presentation of NPR Music's 'All Songs Considered' and the 9:30 Club in Washington, D.C. 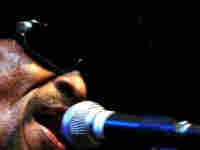 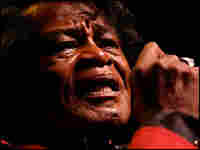 To download, PC users: Right-click and select "save target as." Mac users: Control-click and "save (or download) link as."
toggle caption

Just a year before his death, the Godfather of Soul reached into his vast catalog of hit songs for a night of music, recorded live from the 9:30 Club in Washington, D.C. Hear the full performance, originally webcast live on NPR.org Dec. 28, 2005 as part of NPR Music's live concert series from All Songs Considered. Previous shows are listed at right.

An MP3 version of the James Brown performance is also available for download at left.

James Brown was one of the most influential artists in popular American music, often credited with turning R&B into soul and soul into funk with hits like "Please, Please, Please," "I Got You (I Feel Good)" and "Sex Machine." He was inducted to the Rock and Roll Hall of Fame in 1986, received a Lifetime Achievement Grammy Award in 1992 and was a 2003 Kennedy Center honoree.

The opening act, Chuck Brown, is a native of Washington, D.C. and known as the father of "go-go" music. It's a musical hybrid Brown says is "slower and funkier" than disco, but beat-driven with Latin-flavored congos and cowbells. Performed live, the songs roll into one another, offering an almost continuous beat with plenty of audience participation.