Accessibility links
Simone Dinnerstein Plays Bach Old And New Two years ago, the Brooklyn-based pianist launched her career with a top-selling Bach CD. In the Performance Today studios, she presents more from the master, as well as a new set of variations on a Bach melody. 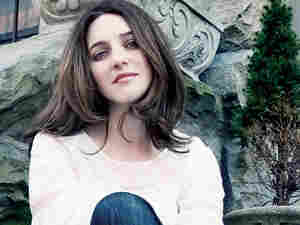 Dinnerstein says she doesn't consider herself a "Bach specialist," but her performances of the composer's work have made her famous. Lisa-Marie Mazzucco hide caption

When I met Simone Dinnerstein in 2007, she was a surprise (and somewhat surprised) classical star. The recording she paid for from her own pocket had shot to No. 1 on the classical charts in its first week. Seemingly overnight, she had gone from scratching out a few small gigs to playing for sellout crowds at the most prestigious concert halls in the world.

That kind of success can exact a price. Even in the world of classical music, some A-list musicians fall for the trappings: luxury hotels, five-star meals, gala receptions, fawning adoration from moneyed admirers. Dinnerstein maintains a clear-eyed focus on what she loves most about all of this: the music.

When she returned to our studio this season, she seemed genuinely reflective, pausing to consider each question for a moment, then speaking straight from the heart. No matter the topic, her thoughts seemed remarkably well-formed, as if she'd been sagely pondering these questions for ages. Her continuing love of music by Bach. Her appreciation for a 21st-century set of variations on Bach. How her new celebrity means more time away from home, but deepens her connections with her husband and son. How her playing has evolved in the last two years.

Dinnerstein creates a similar mood when she plays piano: It's contemplative and insightful. Thoughtfully grounded, but at the same time suggesting something more — a timeless, numinous beyond.

Like Glenn Gould some 50 years before her, Simone Dinnerstein launched her career with a highly praised recording of Bach's Goldberg Variations.

She said she chose the hour-long, iconic Bach piece for a specific reason. At the time, she was pregnant and needed to work on a piece into which she could delve deeply. It took her nine months to get it right. The result was a self-produced record which was then picked up by a big label. Soon, word began to spread of a major new talent.

Dinnerstein had already appeared at one of Carnegie Hall's smaller venues, but before the CD began topping the classical charts in 2007, she'd also played nursing homes and community centers. After she briefly outsold Bruce Springsteen on Amazon.com, and the disc appeared on many critics' best-of lists, doors began opening to far bigger and better concert venues.

Dinnerstein's second CD was recorded live in one of the world's modern shrines to classical music: Berlin's famed Philharmonie. The disc was released in the summer of 2008, and again she chose music by Bach.

At 36, Dinnerstein now has the big career she'd dreamed of as a kid growing up in Brooklyn, and later attending Manhattan's Juilliard School.

Success has come rather quickly, but critics note that she's remained true to herself and her art. Philip Kennicott, reviewing a Dinnerstein recital in the Washington Post, wrote of her thoughtful, expansive approach to the music at hand, praising her for having "more ideas in an afternoon than many pianists have in a lifetime."