Listen
The Search for Mingering Mike 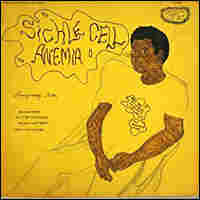 A gallery in Washington, D.C., will open an exhibition of Mingering Mike's album covers this June. hide caption 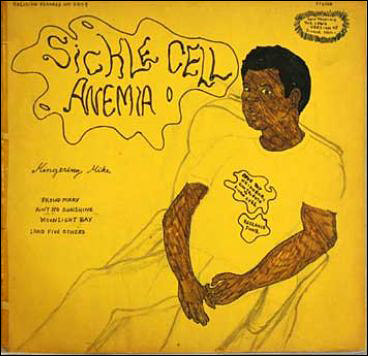 A gallery in Washington, D.C., will open an exhibition of Mingering Mike's album covers this June.

Hear Part One of This Report 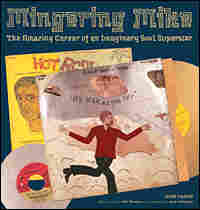 Dori Hadar has partnered with Mingering Mike for a book. hide caption 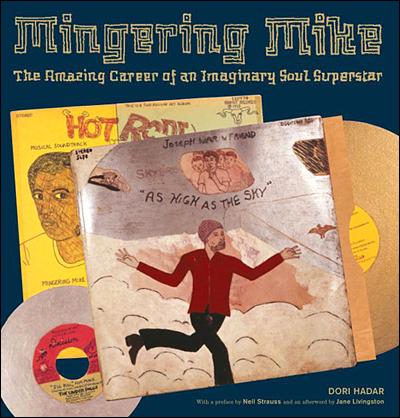 Dori Hadar has partnered with Mingering Mike for a book.

'A Tribute to Bruce Lee'

While rummaging through record bins at a flea market, vintage vinyl collector Dori Hadar found what looked like a vast trove of recordings by an R&B great from the late '60s and early '70s.

But a closer look revealed the whole thing was fake. They were all cardboard discs with hand-drawn grooves, inside elaborately illustrated covers.

The fictitious soul superstar Mingering Mike became Internet-famous, and Dori made it his mission to track this mysterious artist down.

Dori works as a criminal investigator by day, so he used those skills to keep trying to locate whoever was behind all those obsessively crafted cardboard fantasy records.

He left word with one of Mike's relatives.

"I called my relatives," the man known as Mingering Mike now recalls, "And they just happened to say, 'Someone came and left their phone number.' So I called."

Mike was suspicious, but agreed to meet Dori and another record-collector friend.

"He and Frank came to the door and said, 'I have some items that belong to you,'" Mike remembers. "I said, 'My babies, you have my babies?'"

He'd lost all those pretend LPs, 45s, and lyrics sheets, because he'd fallen behind on rent at the storage space where they were kept.

Without notifying Mike, the storage space management sold them off as junk, and they ended up at the flea market where Dori bought them.

"He thought they were gone forever," Dori says. "So he was really happy that they were still around."

But all of the creations Dori dug up only added up to about one-fourth of the work Mike had produced, and some of it's still missing.

What Dori did find were meticulously illustrated album covers with crazy, funky themes and hand-lettered liner notes, even pretend shrink wrap around the covers — saran wrap and scotch tape.

There were songs with titles like "Underwear Drying at My Front Door," "I'd Like to Teach the World (to Eat Like Me)" and "Sometimes I Get So Hungry I Can Eat a Light Bulb (or a Chair, or Even My Hair)."

"I used to think of titles all the time and it just started gradually coming in," says Mike. "It's like a fog, all of a sudden you go through a fog and then you see sunshine. It was just a creative time."

Mike's brothers, sisters, and cousins figured into the fantasy, too.

One cousin was immortalized on a cardboard LP as Audio Andre; another relative became "The Big D."

Mike and his siblings did record some songs on reel-to-reel tape, sometimes tapping out percussion with an afro pick, struck against a mattress or phonebook.

Around the time real-world soul superstars were taking off in the late 1960s, Mingering Mike was launching his imaginary career on record companies he'd made up — Minger Records, Sex Records, Nation's Capital Records.

This was the heyday of the album, according to historian Gerald Early at Washington University in St. Louis.

"Records were interesting artifacts — the labels themselves were an interesting piece of graphic art," says Early. "What Mingering Mike was doing — he's sort of echoing or mimicking this transformation that's taken place, public awareness of black popular music and how the public sees the album as a creative act ... much different as a creative act by the late 1960s than how they saw an album in 1963 or 1964."

On many of Mike's cardboard LPs, the credits read, "written, produced, arranged, performed, accompanied by Mingering Mike." It was as if he was emulating multitalented musicians of the time who wrote, produced, and performed their music — like James Brown and Curtis Mayfield.

"Mayfield and Brown were two of the leading figures of the period who were leading this transformation of black music into this kind of album oriented music," Early says.

If you scan through Mike's album covers, you notice they change as the years pass. Themes crop up later on, like the Vietnam War, drug addiction, poverty, the civil rights movement — even kung fu movies.

And imaginary live performances at venues like the Howard Theater in Washington, D.C., one of many real places in African-American neighborhoods where touring soul greats would play live — theaters that would begin closing in years to follow.

"He's kind of capturing with this album art, says Early, "a world that's entering its twilight."

Suddenly, another part of the real world intruded. Mingering Mike received a draft letter from the U.S. government, ordering him to report for duty in the Vietnam War. The career of the imaginary soul superstar was cut short at its peak.

"So the night before I just put my feelings into words," says Mike, "and I did that song ["All I Can Do Is Cry"] in a capella at the spur of the moment."

Mike went AWOL, and went into hiding. He resurfaced later, after the government offered draft evaders an amnesty program.

So who is the real Mingering Mike now?

Music journalist Neil Strauss remembers when he, and the rest of the world, discovered Mingering Mike.

"I think of all the stories I did in The New York Times, it was the one that got the most response. Gallery owners called and people who wanted to make doc films called."

And now, Mike has a book out, produced with Dori Hadar — Mingering Mike, the Amazing Career of an Imaginary Soul Superstar.

A gallery in Washington, D.C., will open an exhibition of his album covers in June.

Mike and Dori are also producing a real, vinyl 45 version of one of those cardboard 45s.

"It's like a long dream that you've been having so constantly and then all of a sudden you forget about it and then it turns and becomes a reality," Mingering Mike says.

"And it's rather shocking, surprising, amazing — everything wrapped up into one." 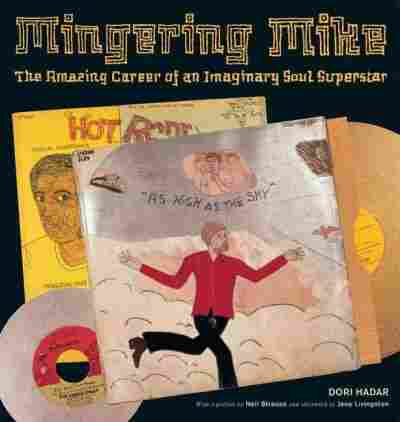 The Amazing Career of an Imaginary Soul Superstar