Accessibility links
Brown Steps In as Blair Bows Out Finance minister Gordon Brown became the new prime minister of Britain on June 27 as Tony Blair stepped down from the role.

Brown Steps In as Blair Bows Out

Brown Steps In as Blair Bows Out 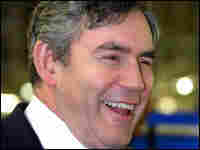 As British Prime Minister Tony Blair stepped down from his post on June 27, finance minister Gordon Brown stepped up to lead the country as the nation's next prime minister.

Before succeeding Blair, Brown, who was chancellor of the exchequer, was widely regarded as the second most powerful person in the administration.

But despite his long-time position as "heir apparent," it was widely thought that the finance minister lacked the charisma of Blair and other politicians.

At a Labor Party convention in late 2006, Brown said, "Some people see politics as spectacle. I see politics as service, because it's through service that you can make a difference and you can help people change their lives."

Making a break from Blair – and disassociating himself from Blair's domestically unpopular choices regarding the Iraq war and recent scandals — might improve Brown's chances for success. But he would need to balance that distance with the need to keep continuity in Labor Party relations.

A day after announcing he would step down on June 27, Blair endorsed Brown for the prime minister's seat. Blair and Brown had a strong friendship years ago, united in the Labor Party's interests, before Blair put his hat in the ring to head the party. Once Blair became the front-runner to lead the party's politics more than a decade ago, their closeness turned to rivalry.

It's been reported that Blair and Brown made an agreement in 1994, in which Brown would allow Blair to run unopposed for the top spot in the Labor Party. If Blair won the prime minister's seat, according to the reports, he would hand the country over to Brown after a term and a half. But Blair stood for a second and third term.

Brown, 56, has been hailed as an extremely effective manager of the country's finances, leading a turnaround in economic growth. But many Britons say he lacks the gift of political persuasion and broader domestic and foreign relations experience.

"He lacks the gift, and perhaps the inclination, to make himself shine in the bright light of publicity," reporter Suzie Mackenzie wrote in the Guardian in September 2004.

Brown took over as head of the country's treasury department in May 1997 after a five-year stint as the "shadow chancellor." He is one of the longest-standing chancellors in the country's history. Brown held other top finance posts prior to this role, from 1987 to 1992.

Brown has been a member of Parliament since 1983. He was chairman of the Labor Party Scottish Council from 1983 to '84.

Before working in government, Brown lectured at Edinburgh University, where he was once a student, and at Caledonian University in Glasgow. Earlier, he spent time as a TV producer for Scottish TV. Brown also has written and edited books.

Brown has weathered his share of personal tragedy. His daughter, Jennifer, was born prematurely and died in 2002. His infant son, Fraser, was diagnosed with cystic fibrosis, according to the Times Online.

Of the death of his daughter, Brown told the Times Online in November, "We had seven or eight wonderful days. We didn't know she was going to die ... until the last few days ... so we had very, very happy days."

Brown and his wife, Sarah, have another son, John.

No serious competition emerged for the role of prime minister. Home Secretary John Reid, a likely candidate, announced his resignation from government in early May, giving his support to Brown.

NPR's Rob Gifford in London contributed to this story.