Accessibility links
Movie Review - 'An American Affair': Innocence Lost In '60s D.C. Thirteen-year-old Adam's dull existence is interrupted by the arrival of a beautiful blonde neighbor — an artist, divorcée and friend of President Kennedy's. Adam soon finds himself out of his depth — and swimming in political intrigue. 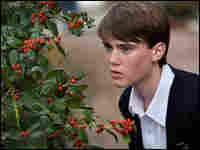 I Spy: Teenage Adam (Cameron Bright) spices up his life by leering at his neighbor — who's got an entanglement of her own. Screen Media Films hide caption

I Spy: Teenage Adam (Cameron Bright) spices up his life by leering at his neighbor — who's got an entanglement of her own. 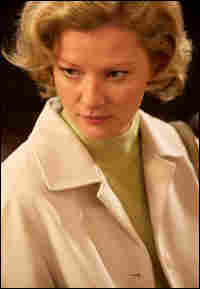 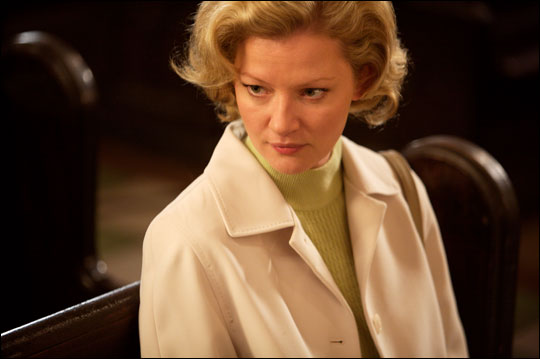 Hard to say what's dumber, the premise or the characters in William Olsson's trashily preposterous An American Affair.

Let's start with the premise, a gender-reversed Lolita tale — involving a 13-year-old boy and his louche thirtysomething neighbor — that morphs somewhere near its midpoint into a conspiracy thriller. The louche neighbor, you see, turns out to be both JFK's mistress and a CIA agent's ex-wife.

Actually, that's only the half of it. She's also a free-spirited artist who says things like "Form is dead" while painting what turn out to be blandly representational canvases, and an ahead-of-her-time head-tripper who drops acid while scribbling state secrets in her journal.

If she weren't played by Gretchen Mol, who's made up to resemble both Marilyn Monroe and Sue Lyon, she'd be unwatchable.

Her young infatué, meanwhile, appears to be angling for Movie Twerp Of The Week. When he's not digging up her formal garden (at her request, form being dead, remember) he's either steaming open her mail, peering through binoculars at the bedroom window (where she likes to sit topless), rifling through her boudoir when she's out trysting with the president, or trying to cop a feel when she's drunk.

He's a little monster, in short, and as acted (I use the term very loosely) by Cameron Bright he comes across as considerably more creepy than clueless.

The character's not made noticeably more appealing by Olsson's direction, which somehow makes young Adam appear old enough (Bright is actually 16) that you half expect him to turn out to be a secret agent.

If you can get past the exploitation-of-minors thing, there's a tawdry exuberance to moments like the one in which the twerp and his overage girlfriend drunkenly splash paint on each other.

But as the plot grinds on, and secondary characters — James Rebhorn as a CIA spook, Noah Wyle as Adam's opaque journalist dad — start muttering about Cubans and the Bay of Pigs, An American Affair loses the Summer of '63 vibe it seems so anxious to cultivate, becoming just another affair to forget.