Accessibility links
Deskercise: Staying Jazzed And Focused At School Some schools are working short physical activity breaks into classes. Proponents of this movement-based learning say these short "deskercises" or "energizers" help kids stay focused — and burn off some calories, too. 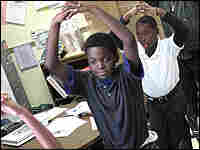 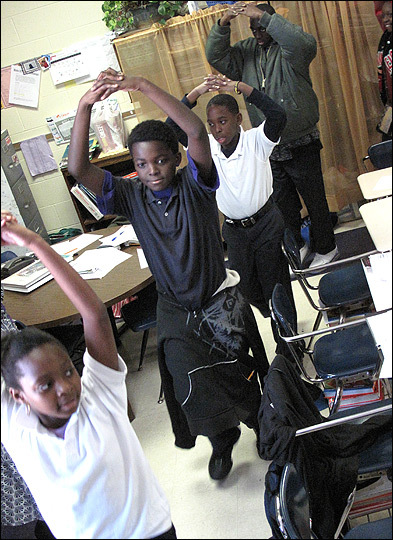 Can 10-minute workouts really change your life? Or is this too good to be true? UCLA's Dr. Toni Yancey answers your questions.

Innovations like this are part of the burgeoning movement to promote more action-based learning. Some studies suggest that incorporating physical movement into the classroom improves student focus and attention.

"Jumping rope is very rhythmic," says Dave Spurlock. And the movement seems to help kids with the rote task of memorization. Spurlock directs physical education for the Charleston County school system and has recently been trained by a program called PE4Life. The program is trying to overhaul physical education classes to focus on fitness and wellness rather than old-style sports competitions.

Using physical activity in the classroom is new in Charleston, but in other cities — Naperville, Ill.; Kansas City, Mo.; and Titusville, Penn. — schools have documented academic improvements linked to these new movement and fitness initiatives.

Shavonna Coakley has learned to pack a lot of movement into her lessons, even poetry. One recent afternoon, she gathered her students in a circle. They had already been to recess and physical education class that day, but Coakley sensed they were fading after lunch.

"If you know the definition of refrain, stand up!" Coakley bellowed out.

Coakley instructed her students to share the answer with classmates. Then, to keep them engaged, she had them tap the rhythm of a poem's refrain as they circled around the classroom, feet gliding and limbs moving.

"And this helps us from going to sleep in class!" piped in Raheem Edding.

Ten minutes of moving around the classroom at moderate intensity seems to agree with a lot of the kids. And there's some evidence that the physical exercise improves mental sharpness.

"What's happening in the body is their heart rate's increasing and blood flow is changing, and they're actually activating the brain differently than when they're sitting down," says John Ratey, a psychiatrist at Harvard University who has taken an interest in the movement to overhaul physical education in schools.

Ratey doesn't claim that exercise makes kids smarter. But, he says, it can make them more ready to learn.

He says that after moderate exercise, the brain seems to work a little more efficiently.

"[With exercise] you're seeing an increase in neurotransmitters ... dopamine and serotonin, norepinephrine. These are hormones related to mood regulation, to attention. And, in general, help the brain be in a better state of equilibrium," Ratey says.

Since the experiment in the Charleston schools is new, it's too soon to say if these mini-exercise classroom initiatives will result in any measurable differences — either in achievement scores or body health, says Ratey. But he says they're a step in the right direction.

Coakley says the movement-based lessons she's experimenting with do seem to help hold her kids' attention, at least temporarily. But she says not all of her students have taken to it.

"Yeah, I would say three or four of my gentlemen would rather have me just stand at that board and show them what I'm talking about," she says.

Distracted Kids Seem To Benefit Most

Researchers at East Carolina University evaluated the effectiveness of short, 10-minute exercise breaks at one North Carolina school. They found that the kids who'd had the most trouble staying focused before the exercise program started were the ones who seemed to benefit the most.

Similar to the efforts in the Charleston schools, the North Carolina program, called Energizers, includes self-contained activities that integrate academic concepts. Thousands of teachers have already gone through a two-hour training program offered by Be Active North Carolina, a nonprofit group.

The program seems to be a hit with many teachers. In North Carolina, Mahar says, 85 percent of the school districts report that some teachers are using the Energizers program.

Students in this North Carolina class take a movement break to help them stay focused and alert.

Students in this North Carolina class take a mini-exercise break and play some virtual sports.