Accessibility links
Seeing Beyond Our Differences Scientist Sheri White says that despite differences in size, shape and color, all humans are 99.9 percent biologically identical. White believes we should embrace our similarities and honor the differences that make each of us unique. 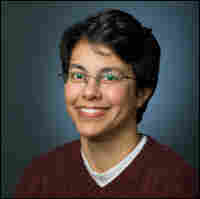 Sheri White is an assistant scientist in the Deep Submergence Lab at the Woods Hole Oceanographic Institution. She has engineering degrees from Purdue University, as well as a Ph.D. in marine geophysics. White lives with her wife in East Falmouth, Mass. Courtesy Sheri White hide caption

My mother is a geneticist, and from her I learned that despite our differences in size, shape and color, we humans are 99.9 percent the same. It is in our nature to see differences: skin, hair and eye color, height, language, gender, sexual orientation, even political leanings. But also in our nature, way down in the DNA that makes us human, we are almost identical.

I believe there is more that unites us than divides us.

My mother came to the United States from India. She is dark enough that she was refused service in a diner in 1960s Dallas. My father is a white boy from Indiana whose ancestors came from Germany in the mid-1800s and England in the mid-1600s. I am a well-tanned mix of the two of them.

It seems silly to admit now, but I never noticed that my parents were different colors. One day when I was a junior in high school, I watched my parents walk down the aisle of our church together. They were participating in the service that day, and as they walked, I saw their hands swinging together in unison. I noticed for the first time how dark my mother was, and how white my father was. I knew them as my parents before I saw them as people — before I perceived their skin color. I'm sorry to say that now when I see a mixed-race couple walking down the street, I see the "mixed race" first and the "couple" second.

When my parents married in 1966, there were still places in this country that had laws against interracial marriage. The landmark Loving v. Virginia case was the following year. My white grandfather, whose father had been a member of the KKK, was not against their marriage. But he was concerned about how others would treat them and about their safety. Thirty years later, my father fully understood how his father felt when I came out to him as a lesbian.

Some of us are men, some are women. Some are gay, some are straight. Some are young, some old. Some are Christian, some Jewish, some Muslim, Hindu, Buddhist and some atheist. Some of us are short, and others tall. Some right-handed, some left-handed, some disabled. We have lots of differences; we are all unique. But deep down inside us, down in our DNA, we are 99.9 percent the same. And I believe we need to remember that.