Accessibility links
'Three Monkeys': Evils Seen, But Only Obliquely The beautifully shot Turkish film is less a story than an exercise in suppression. With shots of dramatic skies and stormy faces, Nuri Bilge Ceylan creates a compelling — if veiled — picture of a family's unraveling. 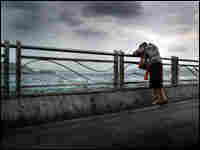 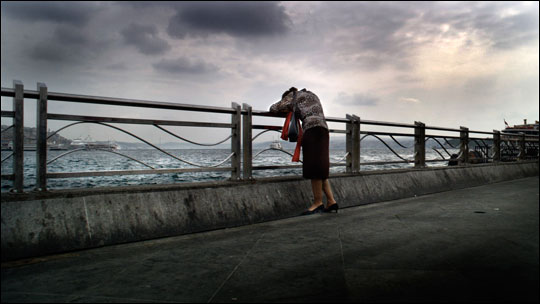 Perilous Waters: The dramatic scenery of Three Monkeys mirrors the struggles of its characters. 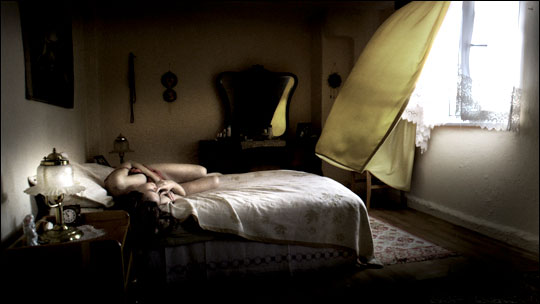 A dark night, a near-deserted thoroughfare, an inert body on the road — these ingredients come from film noir, suggesting that Turkish director Nuri Bilge Ceylan has found a new genre.

Such thriller elements don't define Three Monkeys, however. In style and mood, the movie is close to such previous Ceylan films as 2006's Climates, a masterly psychological drama about unraveling romance.

The drowsy driver who just hit someone on the road is Servet (Ercan Kesal), an Istanbul politician with enough money not to go to jail. He pays his driver, Eyup (Yavuz Bingol), to take the rap and serve a nine-month sentence.

While her husband is behind bars, Hacer (Hatice Aslan) worries about their son, Ismail (Rifat Sungar), who's just failed his college-entrance exam. Ismail says he needs to buy a car so he can find a job. He encourages his mother to get the money from Servet.

Hacer resists at first, but after a violent (although unshown) incident increases her fears about Ismail's future, she visits Servet. Ismail gets his car, but he soon has reason to regret the deal: He realizes that his mother, no longer young but still beautiful, has begun an affair with her imprisoned husband's boss.

Ultimately Eyup is released, and there's another body that must be explained to the police. Eyup uses the tactics he learned from Servet, this time to protect his family. The final twist is gentle, but effective.

Three Monkeys takes its title from the sculpted Japanese simians that represent the phrase "See no evil, hear no evil, speak no evil." In the context of Ceylan's film, that proverb can be taken various ways. The movie's characters aren't exactly forthcoming about what they've seen, or done. Neither is the director, whose style is terse and detached.

This certainly isn't Ceylan's attempt to make a mainstream thriller. The movie is as slowly paced as his previous efforts, and it uses such arty gambits as dialogue that shifts between live delivery and voiceover within a single scene.

In fact the film's opening sequence introduces the director's visual strategy: He cuts between close-ups of Servet, essentially trapped inside his car, and long shots of the vehicle. The contrast between claustrophobic intimacy and aloof distance continues throughout the film: Eyup and Ismail, in alternating close-up, converse through a grated prison door; Hacer and Servet, tiny figures in the landscape, argue on a cliff near the sea.

Ceylan is equally discreet with his use of sound. Ambient noises are carefully orchestrated, and silence underscores the movie's sparseness. The principal source of music is Hacer's cell phone, which plays the same keening ballad of unrequited love every time she gets a call.

Despite the movie's sparseness, it does include a little too much. Two scenes that feature a ghostly figure are distracting and too reminiscent of Hollywood gimmicks.

The filmmaker displays a surer touch in the one sequence that threatens open violence, a confrontation between Hacer and her recently released husband. The unfaithful wife wears a red negligee, a rare splash of color in the movie's muted world. Yet that flash of scarlet doesn't foretell bloodshed; Ceylan still knows that what's hidden can be more devastating than what's revealed.