Accessibility links
Movie Review: 'Crossing Over' - The Immigrants Are Illegal, But The Film's Downright Criminal It's got big names and a hot-button topic, but Wayne Kramer's wretched Crossing Over turns out to be all about its multiple-perspectives conceit. Too bad all of them feel egregiously manufactured.

The Immigrants Are Illegal, But The Film's Criminal

The Immigrants Are Illegal, But The Film's Criminal 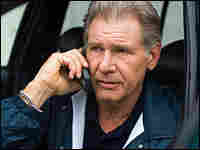 'What Are You Waiting For, Brogan?'

School For Scandal: Summer Bishil plays a Bangladeshi immigrant whose class essay lands her in hot water with the feds. The Weinstein Company hide caption 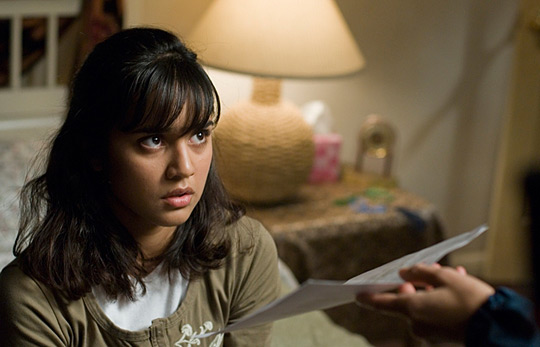 School For Scandal: Summer Bishil plays a Bangladeshi immigrant whose class essay lands her in hot water with the feds.

Crossing Over has a dozen major characters and exactly one visual idea: helicopter shots that crisscross Los Angeles, tying together the fates of its citizens.

Actually the word "idea" may be too generous for this banal storytelling device, but compared to the stuff of the story — yet another of those overwrought, interconnected The Way We Live Now narratives, after the fashion of Crash and Babel — it's positively genius.

Written and directed by Wayne Kramer with all the political insight of a sociology freshman railing against The Man, Crossing Over addresses the issue of immigration from multiple, egregiously manufactured perspectives.

Harrison Ford plays a world-weary Immigration and Customs Enforcement agent burdened by the nobility of his conscience. His Iranian partner (Cliff Curtis), by contrast, comes from a wealthy émigré clan soured by a psychotic need to save familial face. This does not bode well for his free-spirited sister (Melody Khazae) or her Latino lover, a dealer in fake identity documents.

Claire (Alice Eve), an aspiring actress from Australia in search of legal work status, has paid for one of these forged IDs, but ends up crashing (literally) into Cole (Ray Liotta), a shady immigration official who proceeds to blackmail her for sexual favors in exchange for a visa.

Claire has a lover, a British Jew and aspiring musician named Gavin (Jim Sturgess), who's himself angling for residency by fudging his religious credentials.

Cole's better half is an immigration defense attorney (Ashley Judd) whose total dedication to solving Third World misery is signaled by her habit of wearing an African medallion.

Elsewhere in the mix are a saintly, teary-eyed Mexican laborer (Alice Braga), a good kid (Justin Chon) facing temptation from Korean gangsters, and a Bangladeshi whippersnapper (Summer Bishil) whose outspoken views on Sept. 11 bring down the wrath of Homeland Security.

Racial profiling! Twists of fate! Interlocked destinies! Irony upon irony! Impromptu speechifying and didactic expressions of liberal guilt! Crossing Over is the kind of movie that interrupts a robbery gone awry for a ludicrous monologue on the glory of the naturalization ceremony and interrupts the glory of the naturalization ceremony for a ludicrous denunciation of pathological patriarchy.

"In this country," growls one of the movie's puppet-heroes, "we don't abide by that sh-t."