Accessibility links
Ellie Lyden: Mother to an Irish Village As America celebrates Mother's Day, Jacki Lyden reflects on the meaning of motherhood through the eyes of her aunt, Ellie Lyden. Nearly 100, Ellie has long nurtured the small village of Clifden, Ireland, from her rose-covered cottage. 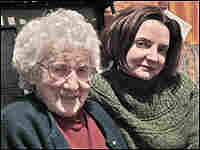 Ellie and Jacki Lyden at Ellie's home in Clifden, Ireland. Ellie, who turns 100 on May 25th, still mothers many from her rose-covered cottage. Will O'Leary hide caption

I say my aunt — and she is an aunt to me — but she's not really my aunt. When I went back with my grandfather to his ancestral village of Clifden, Ireland, in 1986, he was eager to search for his relatives.

We found Ellie and her brother, Michael, cutting turf for the fire across from a white-washed, rose-covered cottage on Galway road.

It was decades later that I found that my actual blood relations are most likely the Lydens who operate the local driving school. But by then, Ellie was family.

"I don't know if we're related," she said that day when I first met her. "But we'll just go on as if we were."

So we have. I've visited her nearly every year since for 21 years.

At 100, Ellie makes me think about motherhood. She's never been a mother; nor have I. She's never married; I did only recently. She lived with her brother until he died.

Yet she's mothered a whole village in Clifden, and in her way, a whole country. Many people have found their way to her door — strangers who became friends.

Across the threshold where the roses grow and the hydrangeas bloom a cobalt blue, is her hearth. It's now an oil stove where the tea is kept warm. On the walls, just the same as the day we met, she keeps the pictures of Padraig Pearse, Gerry Adams, John F. Kennedy and Pope John Paul II.

Her laugh is still a girlish laugh, her manner gentle, and her white hair remains so curly it reminds me of a silvered dandelion's puff.

When she was a girl, she wasn't allowed to emigrate. She stayed home to take care of her mother, who lived to be 102. She looks out the very same windows now that her mother did.

She's means she's in Connemara, in the mountains she used to walk barefoot. She never drove a car. She gave up riding her bicycle to town in her 70s.

I think it's elders like Ellie that Ireland really has to thank. They're the mighty who hung on when Irish life was grim and grey, riven by poverty, civil war and suffering out-migration.

Everyone who visits her sees the endurance in Ellie. There's a history she knows that others are forgetting: where the English barracks once stood in Clifden, when the Black and Tans torched the town in 1921 and how IRA men on the run would come and hide.

For her 100th birthday — besides a private Mass celebrated at home — she'll be glad for every day things: knitting socks and mittens, chatting with Maureen, the talented relative who cares for her. She'll coddle Rosie, her border collie. She'll gather some of the bantam hen's eggs. Some of her visitors will be Clifden's younger entrepreneurs, whose Ireland couldn't be more different.

"Ireland's changing, Jacki," Ellie tells me every year. "... no one's milking their own cows no more. Nor makin' their own brown bread either." But she still kneads and bakes that old soda bread loaf, which I carry back with me on the plane.

Ellie still nurtures a very traditional piece of Ireland's past. Like all centenarians, she's getting a cash gift and a congratulatory card from the Irish president in Dublin, a city she's never even visited.

This weekend, as America celebrates Mother's Day, I'm reminded again that motherhood isn't only a biological fact. It's a quality of nurturing — yourself, others and a way of life.

And that's something Ellie Lyden has done for the last 100 years. 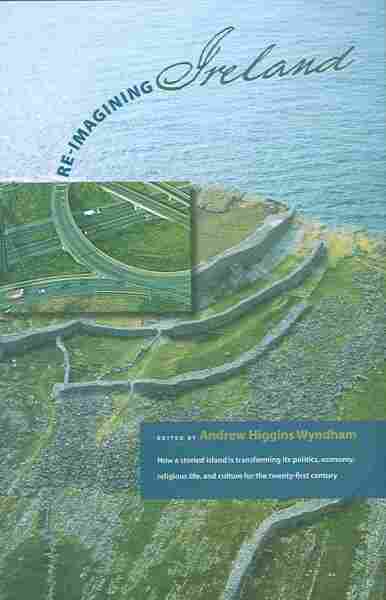