Accessibility links
Wolfowitz: Soft-Spoken Idealist Carries Big Stick As an architect of the Iraq war, Paul Wolfowitz has been a lightning rod for critics. Supporters see the embattled World Bank president as a principled defender of democracy. Critics say he's a hawk obsessed with solving the world's ills through military might. 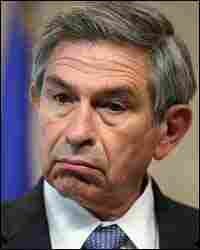 Over the years, the media's monikers for Paul Wolfowitz have included "the hawk," "the gentlemanly Superhawk" and simply "The Believer." Gerard Cerles/AFP/Getty Images hide caption

When faced with charges of ethical breaches at the World Bank, Paul Wolfowitz didn't sit back. He went on the offensive, accusing his critics of launching a "smear campaign" against him and refusing to step down as bank president.

Those who know Wolfowitz — or "Wolfie," as President Bush calls him — were not surprised. He has always believed that old adage about the best defense being a good offense. His entire Washington career, which spans 35 years and six administrations, has been based on it.

As one of the architects of the Iraq war, Wolfowitz shot from relative anonymity to caricature very quickly. To his critics, he is the personification of the neoconservative hawk who believes the world's problems can be solved through military might. To his fans, he is a man of principle, an intellectual heavyweight who believes passionately in democracy and human rights.

Personally, Wolfowitz remains something of an enigma. He displays flashes of exuberance — as World Bank president, he literally danced in the streets of a village in Southern India — but he is not exactly brimming with charisma. Unlike his former boss, Donald Rumsfeld, Wolfowitz speaks in a quiet, occasionally inaudible, tenor. His longtime friend and former colleague Kenneth Adelman describes him as "an incurably nice person."

Wolfowitz plays the violin enthusiastically, kayaks and has a penchant for Civil War trivia. When something interests him, he dives in headfirst. After hearing Egyptian President Anwar Sadat's peace overture to Israel in 1979, Wolfowitz taught himself Arabic, listening to tapes on the way to his Pentagon job so he could hear Sadat's speech in its original language.

In recent years, as the soft-spoken policy wonk's public profile grew, newspapers and magazines groped for a catchy moniker to describe the former deputy defense secretary. The word "hawk" was a favorite, but it fails to capture the complexity that is Wolfowitz. Newsweek elaborated by calling him "the gentlemanly Superhawk." Better, but The New Yorker, in a 2004 profile, probably captured the man best when it ran a profile of Wolfowitz titled simply "The Believer."

Wolfowitz himself would surely agree with that description, but what exactly does he believe in? For one thing, as his writings and speeches make abundantly clear, he believes evil exists in the world and must be confronted. In the 1980s, Wolfowitz saw the Soviet Union as the embodiment of that evil. More recently, he adhered the label to Saddam Hussein.

"We learned in the last century that democracies cannot live peacefully and undisturbed in a world where evil people control whole nations and seek to expand their bloody rule," Wolfowitz said in a November 2003 speech.

Brooklyn-born and raised in Ithaca, N.Y., Wolfowitz is the son of a Cornell University mathematician who emigrated from Poland after World War I. The rest of his father's family later perished in the Holocaust.

As a youth, Wolfowitz was on track to follow his father's footsteps into the hard sciences. Indeed, the world (and certainly the World Bank) probably would not have heard the name Paul Wolfowitz were it not for a chance meeting in Ithaca in the 1960s. There, in a college dorm, a young Wolfowitz met the renowned philosopher Allan Bloom, best known for his book The Closing of the American Mind. Bloom convinced Wolfowitz to switch to political science.

Much to the frustration of his father, Wolfowitz took Bloom's advice and went on to earn a doctorate in philosophy at the University of Chicago. There, his political views were shaped by a group of young ideologues now known as neoconservatives. Wolfowitz's emerging world view combined Wilsonian idealism with hard-nosed real politicking and an abiding belief that countries will embrace democratic institutions if empowered to do so.

In 1973, Wolfowitz left a teaching job at Yale to join the Nixon administration. The young politico quickly developed a reputation for his prescience of looming trouble that others failed to see. In the 1970s, he saw problems stirring in Iran, at a time when most of the foreign policy establishment believed the Shah's grip on power was secure. In 1979, he wrote a secret report predicting that Iraq might invade Kuwait or Saudi Arabia. Eleven years later, he was proven right when Iraqi tanks rolled into Kuwait.

In the late 1980s, Wolfowitz served as U.S. ambassador to Indonesia. He threw himself into public diplomacy, learning the local language well enough to take questions at public gatherings, and even entering a cooking contest sponsored by a women's magazine. (He won third place for a dish he dubbed Madame Mao's Chicken.)

During the Clinton years, Wolfowitz returned to academia, as dean of the prestigious School of Advanced International Studies at Johns Hopkins University in Washington, D.C. But he never stopped thinking about Iraq and Saddam Hussein, and he voiced concerns that President Clinton wasn't doing enough to overthrow the Iraqi leader. In 1998, Wolfowitz joined ranks with a group of neoconservatives to formally call for a preemptive strike against Iraq.

During the 2000 presidential campaign, Wolfowitz tutored then-candidate George W. Bush in foreign affairs. He was later appointed deputy defense secretary, where he continued to argue that Saddam Hussein posed a threat to the United States. At a Camp David meeting only four days after the Sept. 11 attacks, Wolfowitz suggested to President Bush that the immediate U.S. response should be not only to topple the Taliban in Afghanistan, but also to invade Iraq and remove Hussein.

In making the case for war against Iraq, Wolfowitz often drew historical parallels to the Nazis.

"Certainly, the failure to confront Hitler was largely from fear of what the consequences would be, and that led to much greater consequences," he told The Washington Post in 2003.

After the invasion of Iraq, with American casualties mounting and the security situation growing worse, Wolfowitz became a lightning rod for critics of the war. Critics suggested that he might have been less eager to commit U.S. troops had he seen battle in Vietnam. (Wolfowitz had an academic deferment.)

Wolfowitz's name was on a controversial Pentagon document that barred companies from Russia, Canada, France and Germany — nations that did not back the U.S.-led invasion of Iraq — from bidding on contracts for postwar reconstruction. It was seen as a vindictive move, counterproductive to repairing strained ties with allies. But the move fit into Wolfowitz's political philosophy — namely, as he told the Atlantic Monthly in 2002, "You do have to treat your friends different from your enemies."

"I think that's a basic principle of international relations and a lot of the rest of life — except in life, you don't usually have enemies quite as nasty as you do in foreign policy," he said.

Wolfowitz's appointment as World Bank president in 2005 drew a heated response. Within 48 hours after he was tapped for the post, bank staff members fired 1,300 e-mails to an internal comment line; virtually all expressed concern about their new boss.

Bank employees felt that Wolfowitz's hawkish reputation made him ill-suited for an organization tasked with a humanitarian mission.

Supporters felt that Wolfowitz's idealism would serve him better at the World Bank than it did at the Pentagon, and that he was the right person to shake up the moribund bank.

Wolfowitz took the helm of the bank, vowing to uproot corruption and to focus "on a Calvinist obsession with good behavior." Ultimately, it was those words that left him vulnerable to accusations of hypocrisy: A special panel at the World Bank has found that Wolfowitz violated bank rules by securing a promotion for his girlfriend, bank employee Shaha Riza.