Accessibility links
France's Roquefort Cheesemakers Caught In Trade Spat Roquefort cheese producers in France say they've been unfairly singled out in a global trade war that has nothing to do with them. In response to the European Union's refusal to accept hormone-treated U.S. beef, the outgoing Bush administration slapped a 300 percent tariff on the blue-veined cheese. 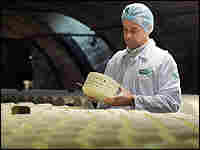 A refiner controls the quality of Roquefort cheeses in a cellar at Roquefort-sur-Soulzon, southern France. Remy Gabalda/AFP/Getty Images hide caption 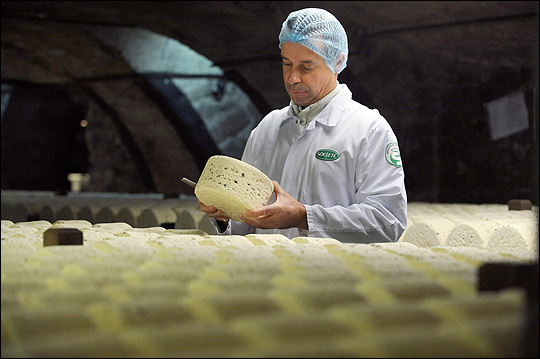 A refiner controls the quality of Roquefort cheeses in a cellar at Roquefort-sur-Soulzon, southern France.

Roquefort cheese is about to become very expensive in the United States — and French cheesemakers are tres unhappy.

On the way out of office, the Bush administration slapped a 300 percent tariff on Roquefort, in response to the European Union's refusal to lift a ban on hormone-treated American beef.

Roquefort producers in France say they've been unfairly singled out in a global trade war that has nothing to do with them.

The quarrels between Washington and the EU couldn't seem farther from the sun-splashed stone villages and sweeping countryside of the Roquefort region in southwest France.

For centuries, the pungent, blue-veined delicacy has been crafted in a complex process using the land, traditions and techniques passed down through generations.

Most bleu cheeses are made with cows' milk, but Roquefort is made with ewes' milk. Only sheep are able to thrive in the arid, hilly terrain.

Robert Glandieres, 47, is one of about 2,000 sheep farmers producing milk for Roquefort cheese. During lambing season, he works 12- to-15-hour days.

Inside his barn are hundreds of ewes, many suckling newborn lambs. Glandieres says the tariff hike shocked everyone here.

"The only economic resource we have in this area is Roqeufort cheese," he says. "Some bureaucrats may take Roquefort as a symbol of French gastronomy, but here it's the livelihood of 10,000 people. We feel like helpless pawns in a trade war between Washington and Brussels."

While other European products were also targeted by Washington, Glandieres says only Roquefort was hit so disproportionately.

About 10 miles from Glandieres' sheep farm, the village of Roquefort clings precariously to the side of an enormous limestone cliff that sheared off in prehistoric times.

The seismic contraction left the area sitting on a honeycomb of underground caves — and, this being France, they were found to be the perfect environment for aging cheese.

It is within the cool rock walls and humidity of these caves that rounds of white, sheep's-milk cheese ripen into Roquefort. Their blue streaks are a product of the spore penicilium Roquefort, which occurs naturally here.

At cheesemaker Societe, the biggest Roquefort producer, tourists can visit the caves where 70,000 cheeses are aging. Georges Benites is visiting from Roquefort's largest export market, Spain.

"Well, there are not caves like this, so I wanted to visit this to know why Roquefort is so important in the world and why they export everywhere their cheese," Benites says.

The tour group discovers the history and lore of Roquefort from a film projected on the damp cavern wall.

In 1411, King Charles VI heralded the cheese in letters, and in the ninth century, Roquefort crumbs were known to cling to the beard of Frankish Emperor Charlemagne.

Local legend says the cheese actually got its start some 2,000 years ago in Roman times, when a young shepherd happened on a beautiful girl and stowed his lunch away in a cave to follow her.

Upon his return, his cheese sandwich was covered in blue mold. Famished, he ate it anyway, and Roquefort was born. (We never do find out if our shepherd gets the girl.)

The U.S. first applied tariffs on Roquefort in 1999 to protest the EU beef ban.

Thierry Zurcher, CEO of the Societe brand, says producers lowered their margins in 1999 to stay competitive in the American market.

Zurcher says the new tariffs turn Roquefort into a luxury product — like Champagne — and therefore, they amount to an embargo.

"But we'll still try to stay in the market and wait out these absurdities, because the U.S. has a real, growing gastronomical movement and people appreciate this cheese," Zurcher says. "If it weren't for the tariffs, the U.S. could have been our No. 1 export market."

Zurcher says he sees no end in sight to the beef battle or the cheese tariffs — unless the new American leader happens to be a fan of Roquefort.