Accessibility links
Donor-Conceived Kids Connect With Half Siblings The main reason parents and their children cite for seeking out genetically linked half siblings is curiousity: They want to know about possible similarities in appearance and personality. Connected by genes, new kinds of families are taking shape. 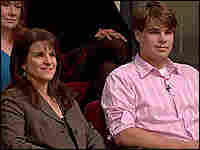 Wendy Kramer, shown here with her son, Ryan, started the Donor Sibling Registry, which has helped connect more than 6,236 half siblings and donors with each other. Wendy Kramer hide caption

Parents who've conceived children using a donor's sperm or egg are increasingly tracking down their own children's "donor siblings," according to a study in the journal Human Reproduction. These parents and children want to learn more about their genetically linked "half brothers and half sisters," and are curious about possible similarities in appearance and personality.

"It's a new form of family," says sociologist Tabitha Freeman, of the Centre for Family Research at the University of Cambridge in England.

"It's not, perhaps, what people traditionally understand by family — sort of mum, dad, child. And yes, they do describe each other as brothers and sisters."

Freeman says it's often assumed that people who seek out donor information want to learn about their own medical history. But in her study, the main reason people cited was curiosity.

Most families that use assisted reproduction don't seek out donor siblings. Freeman studied a self-selected group: members of the U.S.-based Donor Sibling Registry.

The registry was started in 2000 by a Colorado mother, Wendy Kramer, who wanted to find siblings for her only child, Ryan. Today, there are more than 20,000 people on the registry and more than 6,000 people have been connected.

Kramer has learned of six half-sisters related to Ryan, who's now 19. He's met one, a girl named Anna. The two families traveled to see each other twice over the last two years and this summer plan to meet two new half sisters that they learned about last year.

Ryan keeps in touch with the girls through e-mails, instant messaging and on Facebook. Freeman says that's typical. And she says the parents of one child often report feeling a connection to the donor siblings of their own children. Kramer says she felt this way when she first met Anna.

"It's kind of weird. I mean, I know Anna is nothing to me," says Kramer. "I'm not related to her but when I saw this little girl who had parts of my son in her, there was an immediate connection to her. And with her mom. I mean, we hugged each other and we cried."

What Does It Mean To Be Related?

In Freeman's study, the average number of related donor siblings who've found each other was five. But some of those on the registry have 20, 50 or even, in one case, 120 donor siblings.

"When you get to a certain number, it's just a very different understanding of what a sibling is," says Freeman. "So we do need research on these bonds between these larger numbers."

Freeman surveyed 791 parents on the registry who were seeking out a donor or donor sibling. Most were usually single mothers (45 percent); lesbian parents (41 percent) and to a lesser extent, heterosexual couples (14 percent).

Almost all reported positive results when they connected with a donor sibling.