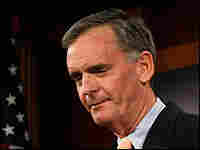 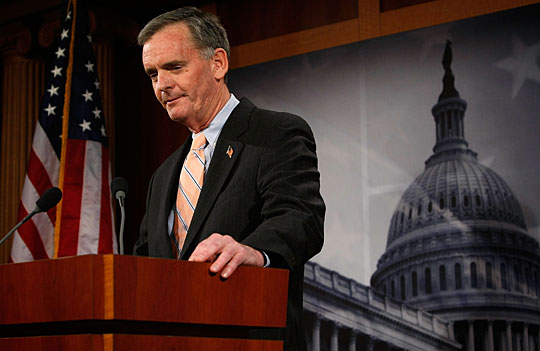 President Barack Obama on Thursday released his $3.5 trillion budget plan, which calls for major spending in many of his key initiatives. Taxes would be boosted for the wealthy and deficits would certainly increase, which Sen. Judd Gregg of New Hampshire, the senior Republican on the Budget Committee, called "serious problems."

"The budget is reasonably honest, and in fact, I give them credit for having brought on line and made clear the costs of the war," Gregg told NPR's Melissa Block.

"But the budget itself has some real serious problems, in my opinion, because it is a massive expansion in spending and a massive expansion in taxes. And the real problem is that in the out years, not only does it increase spending in taxes, but it passes on to our children a government that can't be afforded, and that's a big problem."

The Democrats strengthened their majority in Congress on an agenda that included new initiatives on things like health care, energy and education. But Gregg disagrees with the notion that more spending is necessary.

"I don't think [Obama] was elected to bankrupt the country," Gregg said. "Basically if you run up deficits at this level — where you're doubling the national debt in five years and tripling it in 10 years and then doing virtually nothing to bring it down in the out years — and you don't address the fundamental underlying problems that's driving the cost of spending, which are the cost of the major entitlement programs as a result of the retirement of the baby boom generation, you're going to pass on to our children a government that simply can't be afforded."

Gregg says he worries that unlike people of his generation, current young people won't be able to send their children to college or buy homes.

"The burden of taxation will be so extraordinarily high to maintain the cost of the retired generation that they simply won't be able to have a high quality of life," Gregg says.

Gregg says those making over $250,000 are frequently the small-business owners and sole proprietors.

"Seventy percent of the jobs in America today are created by small-business people," Gregg says. "So basically what you're putting in place is a tax burden which is going to make it very difficult for those folks who are the entrepreneurs and job creators in our society to be successful."