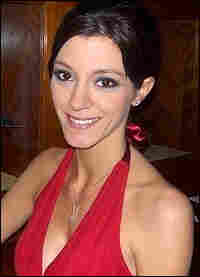 Melissa Cox was 17 and anorexic when she had a heart attack. Now 22, she started a Web site that describes her struggle with, and recovery from, the eating disorder. Courtesy Melissa Cox hide caption 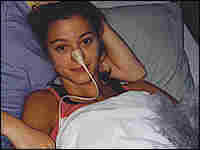 Cox, hospitalized after her heart attack, at one point weighed only 78 pounds. By sharing her experiences, she hopes to inspire others to seek help. Courtesy Melissa Cox hide caption

A video shows images of rail-thin celebrities while a song plays in the background: "Lie awake in bed at night/ And think about your life/ Do you want to be different?" This is one of the dozens of videos that pop up if you search the term "pro-ana" in YouTube.

Pro-ana refers to the idea of promoting anorexia nervosa, an eating disorder characterized by extreme low body weight and body image distortion. A similar term, pro-mia, refers in a similar way to bulimia. In recent years, pro-ana and pro-mia Web sites have proliferated. They are — in their deeply unsettling way — support communities.

These sites feature photographs and videos of extremely skinny women and girls and tips for crash dieting, fasting and forced vomiting. Dr. Rebecka Peebles of Stanford University has been studying these sites and the people who use them. She says most users of these sites are women, but men and boys visit them, too.

Peebles say eating disorders often cause feelings of isolation and depression. Many people suffering from anorexia or bulimia go to these Web sites because they are looking for emotional support, but it is difficult to scientifically measure their effects.

"What we don't know is who of these Web site users are most vulnerable to the risk messages ... inherent in the Web sites," Peebles says.

"I had never met anyone with an eating disorder before," she says, "so I kind of felt like I found somewhere where I would be understood."

At the time, she was a teenager struggling with anorexia. At one point, the 5-foot-7-inch Cox weighed a mere 78 pounds.

Cox used pro-ana sites regularly, and she says she became almost addicted to them. Then, when she was 17, she had a heart attack as a result of her illness. That started a slow but successful journey toward recovery.

Part of that process was starting a Web site, Ana Death, to help anorexic sufferers recover. Cox's site mimics the style of "thinspiration" sites — where people who choose to be anorexic post tips on controlling eating — to communicate her healthy message.

"We found that users of both types of sites were more likely to be hospitalized" than those who didn't visit either kind of site, she says.

On Ana Death, Cox has posted pictures of herself when she was incredibly thin. She says she worries at times that they might motivate visitors to starve themselves. But she also includes accounts of how physically devastating her eating disorder was to demonstrate how dangerous anorexia can be. "All I can do is put my experience out there," Cox says, "and hope it's being helpful."