Accessibility links
From The Fields To The Classroom: A Mother's Tale Lourdes Villanueva's parents were migrant workers who harvested fruit throughout the South. Recently, she told her son, Roger, what it was like in the 1960s trying to get an education when her family was constantly on the move.

Listen
From The Fields To The Classroom: A Mother's Tale 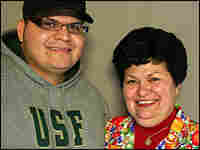 Lourdes Villanueva and her son Roger at a StoryCorps in Tampa, Fla. StoryCorps hide caption 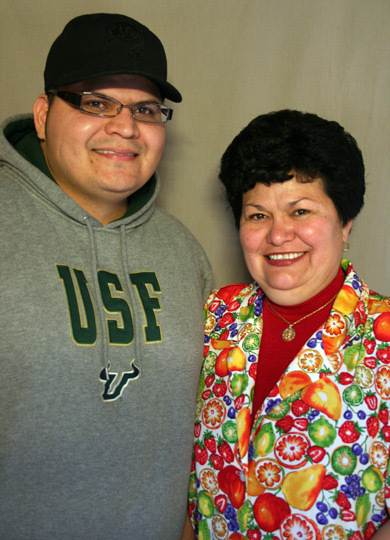 Lourdes Villanueva and her son Roger at a StoryCorps in Tampa, Fla.

Lourdes Villanueva's parents were migrant workers who harvested fruit throughout the South. Recently, she told her son, Roger, what it was like in the 1960s trying to get an education while her family was constantly on the move.

Villanueva says that everywhere her family went, even if they only planned to stay and pick crops for a month or so, her mother made sure to enroll the children in school.

But Spanish was frowned on in the school systems. "Even out in the playground, they used to have the little playground patrols, which were our friends [who] were supposed to turn you in if you were speaking Spanish," she says. For that reason, Villaneuva says she was always in trouble.

The family moved about 10 times during one school year, she recalls. The nomadic existence began to take an even greater toll when she hit ninth grade. She tells Roger, "The ninth grade is when you started working for credits to graduate, and we never stayed in one place long enough to get any credits. So why even bother? I thought I knew everything that I needed to know at that time and got married at 18 and had you."

Villaneuva says she went to work in the fields and that her son "pretty much grew up in the back of the pickup truck."

"On my breaks, I had to change your diaper and do whatever needed to be done and continue on working. And I always thought that you needed to do what I didn't do, which is finish your education first," she says.

But Roger points out that she achieved that goal, leading by example and getting her GED by cracking the books and "studying with all of us in the back of the truck" in the fields at lunchtime.

Villaneuva took night classes at community college, leaving her husband in charge of their three kids.

"Dad was the one to take care of us, cook for us. And we hated the beans and eggs, because that's all he knew how to cook for us," Roger says. "He used to make us eat everything because he wanted us to appreciate everything that we had, because I know both of y'all came from basically nothing. And I was just so proud the day that you graduated."

His mother laughs and says, "I had to hurry up and graduate before you guys did, because I knew you guys were coming right behind me."

Villanueva received her bachelor's degree in social work in 2000.

Her son, who is a financial aid adviser at the University of South Florida, then told his mom something he never had before.

"If I was to have the choice to choose another mother, I would never choose anybody else but you," Roger says. "And when I look for my partner, I always said, 'If my wife can be half the woman that my mother is, I will be OK.' And I know I've never told you that, but that's the way I feel."

Produced for Morning Edition by Nadia Reiman. The senior producer for StoryCorps is Michael Garofalo. Recorded in partnership with WMNF and the Redlands Christian Migrant Association.