Accessibility links
Bailing Out Banks, One Toxic Asset At A Time Raj Bhatia and Albert Behin are convinced they can make money buying up mortgages that no one else seems to want. The former hedge fund manager and mortgage broker want toxic assets — the stuff that's killing banks' balance sheets.

Listen
Bailing Out Banks, One Toxic Asset At A Time 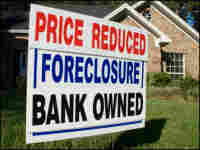 Bhatia and Behin buy pools of mortgages that are "underwater," meaning the homes are worth much less than their mortgages.

"We got together and basically said, 'You know, there's going to be tremendous opportunities buying some of this residential debt that I basically helped create over the past six, seven, eight years,'" Behin says.

For Bhatia, who graduated from Columbia Business School in the mid-1990s, that means "getting dirty" — moving out from behind a desk and into the world. Bhatia and Behin travel around, meeting potential investors and checking out the houses with mortgages they may buy.

Behin started selling mortgages in 2000, just as housing prices began to skyrocket. He says he saw a lot of the abuses and terrible lending practices, and he steered clear of most of that.

Now, as those mortgages are starting to go bad, Behin and Bhatia are looking to buy them up at a discount, and they're meeting with potential investors like Benek Oster, who made millions in finance over the years. The three met recently at a diner in North Bergen, N.J.

"Hypothetically, I've got $5 million I'd like to put in. How much are you buying, how many loans are you getting for $5 million?" Oster asks.

Behin tells Oster that for $5 million, they could buy about 50 home loans.

Would there be enough homes if someone gave them $100 million?

"Are you just saying that?" Oster asks.

"No, not at all. There's $7 trillion of mortgages underwater right now," Bhatia says.

Banks have given lots and lots of mortgages to people who've stopped paying. To get the mortgages off their books, the banks have sold them off at huge discounts. And they do it in massive numbers — thousands of mortgages at a time — to hedge funds and other large investment funds.

A lot of these hedge funds don't actually want to keep these mortgages.

They bought them just to trade them, the way they'd buy gold, oil or pork bellies.

The funds buy low, mark up the price a little and then sell to guys like Bhatia and Behin for a profit.

The two have lined up a couple of investors, and now they're getting ready to buy some mortgages. They're thinking of picking up 40 mortgages connected to homes in New Jersey, and they want go see what they're buying. So the two head to Wayne, a small town about 20 miles from New York City.

Behin and Bhatia have made more than a dozen trips so far to look at different homes.

"I'm not cut out for field work," Bhatia says.

Now here's the math: The hedge fund bought the mortgages at roughly 30 cents on the dollar.

The hedge fund is looking to sell to Bhatia and Behin for around 40 cents on the dollar.

The two know certain things about this group of loans. They know that 90 percent of the houses are in foreclosure. They know the group is made up of what are called Alt A loans — which are basically a step above subprime.

They also know interest rates on the loan are as high as 12 percent.

But there are a lot of things the mortgage documents can't tell you.

For instance, Bhatia and Behin don't even know if someone's living in the house they're about to go look at or what the neighborhood is like.

On a drive near the house, Bhatia likes what he sees.

"OK, nice neighborhood. You can imagine what this looks like in the summertime with all the canopy of trees. It's an established area. I'm really impressed with this. These homes are great," Bhatia says.

Behin notices another good sign: no "for sale" signs.

In other words, the market's not glutted. If they take over the house, they can sell it.

The house is a red colonial on a suburban street. The lawn is well-manicured.

"We can see that there are kids there," Behin says. "This is a neighborhood where you grow up a family. There's a backyard. This house is in generally good condition."

The current homeowners are underwater; they haven't made a mortgage payment in 16 months.

A bargain. And then, as investors, they have several options.

Option No. 1: They can approach the homeowner to try to rewrite the mortgage.

"Their monthly payments can go down from $1,300 to $500 a month. And we're making an incredibly good return on our money," Bhatia says.

But, he says, many homeowners in this situation can't even afford that much. So there's option No. 2: The home goes into foreclosure and the homeowners can rent it.

Option No. 3: They can pay the homeowner to leave. In that situation, Bhatia has a simple pitch to the homeowners.

A Drop In The Bucket

What Bhatia and Behin are doing may seem like a free-market solution to the crisis. But they're only two guys.

"There are not enough of us out there to absorb what's out there," Bhatia says. "You got to remember, there's trillions of dollars of product right now that has to be dealt with, that has to be worked through, and it's certainly not going to happen with just a few people putting $10 million, $15 million, $20 million of this product away."

And here's another problem. Bhatia and Behin, as hard as they're working and as complicated as it seems, are actually dealing with the simplest assets out there — home loans between a bank and a person.

They're not dealing in the complex world of mortgage-backed securities, where mortgages were bundled, sliced and sold to thousands of investors, and where it's almost impossible to figure out what you're buying and who you're buying it from.

Essentially, Bhatia and Behin are buying the least toxic of the toxic assets on banks' balance sheets.

Now, someone just needs to buy the rest.