Accessibility links
Number Of Years In Print For 'Harper's Index': 25 First published in March 1984, Harper magazine's monthly Index is, in the words of editor Roger Hodge, "a statistical poem."

Listen
Number Of Years In Print For 'Harper's Index': 25 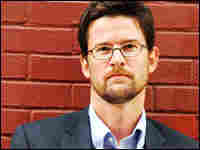 Roger Hodge has been the editor of Harper's Magazine since 2006. Harpers hide caption

First published in March 1984, Harper's Magazine's monthly Index is, in the words of editor Roger Hodge, "a statistical poem." Each month, the Index presents a single page of meticulously researched statistics and figures — sometimes linked thematically to one another, sometimes standing on their own.

"The index is a list of 40 statistics that are very artfully [and] very carefully arranged," Hodge tells All Things Considered co-host Melissa Block.

Six people work on researching and writing the feature each month, typically gathering three times the number of factoids that the magazine runs. The published items are variously amusing, eye-opening and outrageous. Take, for instance, the leading entry on the inaugural Index:

The Index was the brainchild of former editor Lewis Lapham, who observed that many newspaper articles are built around a number. Lapham's idea, says Hodge, was to strip away the extra verbiage in order to "convey a newspaper's worth of information on a single page."

"One of the things that we try to do is keep it surprising so that the reader really doesn't know what's coming next," says Hodge, who adds that his favorite Index item of all time is the average number of peas in a pod (answer: 8).

In its 25 years of existence, Harper's has published 12,058 Index items — all of which can be accessed and searched on the magazine's Web site. A quick look at public radio Index items throughout the years reveals a hodgepodge of trivia, including:

(From June 1999)
Hours before NATO began bombing Kosovo in March that NPR aired its last e-mail from a 16-year-old Albanian girl there: 6