Accessibility links
Welcome To The Twitterverse NPR's social media strategist, Andy Carvin, spends most of his time working behind the scenes, but once a month or so, he finds his way on air to talk about Internet culture. For Weekend Edition, he found himself talking about technology — and Twitter in particular — to a most unlikely person. 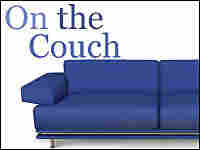 Weekend Edition Saturday's occasional "On the Couch" feature brings together guests of different backgrounds for a conversation on a particular topic — discovering other points of view and perhaps sparking unexpected ideas.

More On The Couch 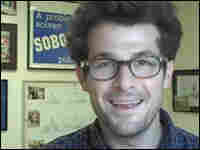 Are you on Twitter? Has it been useful to you or is it just the latest fad? Sound off in the comments below or send us a tweet @NPRWeekend.

As NPR's social media strategist, I spend most of my time working behind the scenes, but once a month or so, I sometimes wriggle my way on air to talk about Internet culture. For this Saturday's Weekend Edition, I found myself talking about technology — and Twitter in particular — to a most unlikely person: NPR senior news analyst Daniel Schorr.

There we were in the studio — Schorr, Scott Simon and I, three generations of people who each grew up with vastly different experiences when it comes to journalism and technology. When Dan filed his first story in the late 1920s — no, that's not a typo — he had to scramble to find a telephone in the neighborhood to get it to his editors, who then worked the text into something that would be read the next day by people throughout the Bronx, N.Y. Flash forward to 2009, and I'm standing on the National Mall filing from Barack Obama's inauguration using tweets and text messaging, interacting directly with people around the world in real time.

So it was appropriate that we spent a lot of time talking about Twitter, given how it's become perhaps the fastest tool for people to share news with the world.

"I'm becoming familiar with it, even as I listen now," Schorr told us. "It really is another generation. I'm agape as I learn about how people can communicate with the outside world. It somehow reminds me ... of something in ancient Greece, the agora, the marketplace. You come out and you say things at the marketplace and everyone can hear. And every person now seems to be a network."

"We're losing the difference between audience and conversation," Schorr added. "It's all becoming part of one vast thing. ... You're not really communicating one to one anymore ... and the whole world is going to end up as an audience."

Leaning over a computer with Schorr, Simon sent out a tweet asking people why they used Twitter. We started to get responses in a matter of seconds:

bdmckeown: I tweet to circumvent the usual obstacles to staying in touch.

GooseRockDesign: why do we chat in salons or coffeehouses? because the human background noise can contain entertainment, info., useful things.... and in tweeting you develop a circle, a community, and communities are always comforting.

susanellingburg: I tweet for the same reason I read — to know I'm not alone.

mat: No offense, but that's kind of a dumb question. Rephrase as: Why do you communicate at all? Just one more method of doing so.

ultrafastx: because talking to oneself is generally frowned upon these days.

thc1972: why do you go to a good cocktail party? Conversation, viewpoints, gossip, jokes, interaction

MarilynM: for conversation, community and connection. (there's also a lot of humor here.) :)

ckuns: Twitter is the new "water cooler" ... where you read the things you have to know but wouldn't find out otherwise

dirkfitzgerald: I tweet because I am might be missing out on the largest (and possibly) most interesting conversation ever.

We also received a question from a Twitter user who goes by the name EvaCatHerder: "Given Dan Schorr's long history w/the evolution of news media, what does he think we are losing in web-based media? Gaining?"

"What we are losing is editing," Schorr said. "I grew up and nothing could be communicated to the outside world that didn't go through an editor to make sure you had your facts right, spelling right and so on. Now, every person is his or her own publisher and/or her own editor or her own reporter. And the world is full of people who are sending out what they consider to be news. It may be, it may not be, it may be made up and it doesn't matter anymore. That, to me, is the worst part of this. The discipline that should go with being able to communicate is gone."

In response, I offered up two recent examples of breaking news stories that played out on Twitter: the attacks in Mumbai and the riots in Greece. Occasionally, you'd see stories circulating on the Internet — or even on air — that weren't necessarily true but because it was happening so fast it was hard to keep up with it. And then people on Twitter and Facebook started asking, 'Are you really sure about that? Did you see this yourself? Did you get this from a news source? Did you get this from a blog?' And so, in a way a system of checks and balances kicks into high gear with people who are just innately very skeptical — wanting to get to the heart of a matter. And sometimes stories actually get debunked that way.

Did I change Schorr's opinion on social media and news? The jury is still out, but he did say he wanted to try it out for himself. So I've set up a Twitter account for him — @danielschorr — and I hope we'll see him using it in the near future. The Twitter community is already looking forward to it — at last check he had over 100 followers — and they've started offering him some words of encouragement:

mattsimoto: his tweets will carry the same gravitas as his voice.

clairecelsi: Twitter is a great way to introduce yourself and NPR to a whole new audience.

Bookworm: Please tell him "welcome" and that Twitter can be whatever he wants it to be — conversation, micro blog, grocery list. ;-)

jpippert: Tell @DanielSchorr it's ALL abt dialogue. Biggest critique of newsppl on Twitter is only talking at us & only following each other.

dontgetcaught: am suspecting that @danielschorr's pithy style will fit into Twitter easily. A bit like super-short dispatches from Murrow's time?

But perhaps the best advice came from @JoeCascio in a tweet he actually posted a few days earlier, during the Oscars: "Twitter lets us all share a big couch and watch TV together. Remember when people did that?"

I think that's something all three of us could relate to. Welcome to the Twitterverse, Daniel Schorr.

Daniel Schorr Meets The Twitterverse, With The Help Of Rainn Wilson