Accessibility links
What's New At The Library? Financial Advice More than two dozen libraries around the country are getting grants to train librarians and set up programs to teach people about investing. Libraries have the ability to reach large numbers of people who may need help with their finances. 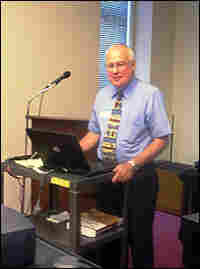 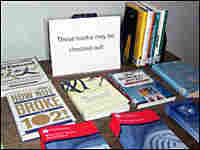 With 401(k) and college funds tanking, the stock market riding a crazy roller coaster and some banks on the brink of nationalization, it's no wonder the average Joe and Jane are just a little nervous about what to do with their money. Where to turn to under such circumstances? If you don't trust your stockbroker, what about the reference librarian at your local public library?

"The current economic climate has made libraries a more vital institution in communities," says John Gannon, president of the FINRA investor education foundation.

A number of libraries around the country are getting grants to train librarians and set up programs to teach people about investing through a collaboration between FINRA and the American Library Association. Gannon says his organization turned to libraries because libraries have the ability to reach large numbers of people who may need help with their money.

"Whether that's women facing retirement, teens or even younger people who are still in school, it's figuring out how to get that information to people," he says. "And that's what the libraries are good at."

Over the past two years, grants have gone to libraries — including ones in Athens, Ga., Fargo, N.D., and Riverside, Calif. — to develop programs aimed at people of different ages and incomes. The programs use the Web, videos and even traveling vans to reach as many as possible.

The Newton Free Library in Newton, Mass., used its grant to set up a retirement planning club for women in 2008.

Nancy Johnson, supervisor of the reference department at the library, says it was a great time to begin the program.

"We have 2,000 people a day and more that come in and they are certainly job searching," she says. "But the people that are in this club are trying to learn about what economics means. It's a great time to study economics when it specifically pertains to you."

At monthly meetings, women ranging in age from their 20s to their 80s exchange information, listen to lectures and learn how to use the library's investor education resources. Johnson says many of the women have questions about things they hear in the news.

Johnson says the number of people coming to the meetings seems to be increasing and a number of men have started attending, too.

Lessons From The Depression

Meeda Moy, 86, is a regular in the club. Moy says she sees it as an opportunity to continue a lifetime interest in investments which began with a hard lesson when she was just 7.

Carol Plumb, 47, who lost her job, heard about the club through her cousin.

"I have that whole fear of being a bag lady that a lot of single women still have," she says. "So I have been interested in managing my money because I've been doing it all along. I know how to do things, but I'm afraid to execute. So it forces me once a month to say, 'Have you done it yet?' So it's helped."

For 30-year-old Olympia Valentine, it's all about the future: "I just wanted to get more involved and learn more about my investments so I can plan for my retirement," she says. "Right now I have other people do it for me and I think it's best to do for myself."

So the next time you're wondering what to do about that 401(k), you might want to ask a librarian.