Accessibility links
Recalling America's Love Of Peanut Butter Sales of peanut butter have taken a nosedive since salmonella was traced to a peanut plant earlier this year. It's a disturbing cloud over a product that has long been part of the American way of life. 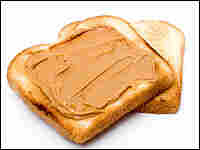 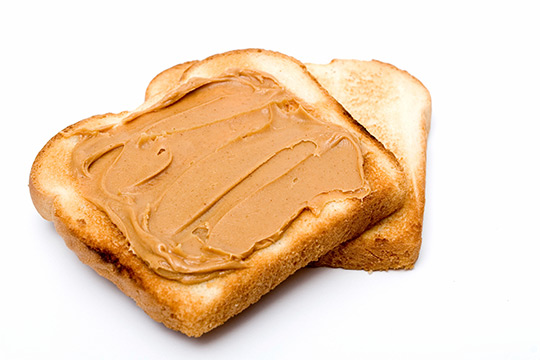 We love peanut butter. Americans eat 700 million pounds of the stuff every year. That's about $800 million worth. But sales of peanut butter have taken a nosedive since salmonella was traced to at least two peanut plants this year. The cloud over America's favorite spread is disturbing.

Ironically, peanut butter started as a health food. Who invented it isn't totally clear because there are two competing claims to fame. One story says a St. Louis doctor created peanut butter in 1890 as a protein source for people with bad teeth who had trouble chewing meat. Another story says John H. Kellogg first dished it up in 1895 as part of the healthful, vegetarian diet at his Michigan sanitarium.

But it was the country's kids who really took to peanut butter.

Today, according to the Peanut Advisory Board, the average American child eats 1,500 peanut butter and jelly sandwiches before graduating from high school.

Peanut butter is a good thing to have around in tough times. During World War II, meat was scarce and expensive, and protein-packed peanut butter was a cheap alternative.

Remember ants on a log? Celery sticks stuffed with peanut butter and topped with raisins. They're on the menu at Peanut Butter and Co. in New York, along with all kinds of peanut butter sandwiches, including something called the Elvis — grilled peanut butter, banana, honey and bacon.

It's Girl Scout cookie season. But not to worry about the recent salmonella scare. The Scouts say Tagalongs and Do-Si-Dos are safe to eat.

When I was first married, I feared for the relationship. My husband had come from a Peter Pan smooth home and I was strictly Skippy chunky. We learned about compromise.

We were out of step, though. The National Peanut Board says women and children prefer creamy and men like chunky. On the East Coast, creamy is the favorite. It's chunky on the West Coast.

Chunky or creamy, the peanut board says the product is eaten in nearly 90 percent of American households. It's a breakfast spread on toast, lunch as a sandwich and a snack any time. Tell me you've never eaten it right from the jar with a spoon.

A few weeks ago, Sen. Tom Harkin of Iowa, chairman of the Senate Agriculture Committee, blasted the company that let tainted peanuts into the food supply. He said, "What's more sacred than peanut butter?"