Accessibility links
Broadcasting Pioneer Paul Harvey Dies His trademark greeting, "Stand by for news," was instantly recognizable. At the height of his fame, more than 22 million people would stand by, waiting for his mix of the serious and absurd. 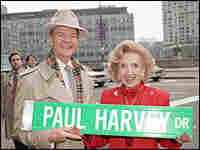 Paul Harvey and his wife, Lynne, pose with a street sign honoring him in Chicago in 1988. Charles Bennett/AP file hide caption 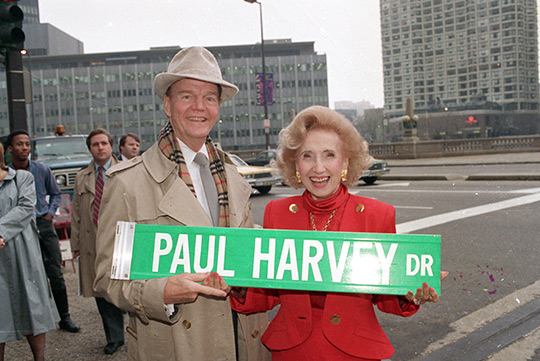 Paul Harvey and his wife, Lynne, pose with a street sign honoring him in Chicago in 1988.

Radio newscaster Paul Harvey, one of America's most familiar voices, has died. The AM legend was 90 years old, and up until recently was still heard by millions of listeners on his ABC radio broadcasts.

His trademark greeting, "Stand by for news," was instantly recognizable. At the height of his fame, more than 22 million people would stand by, waiting for his mix of the serious and absurd.

Delivered in his unique Midwestern staccato, he was famous for the anecdotes he'd tell about the lives of famous people. "And now," he would announce, "the rest of the story." The gimmick was that he wouldn't reveal the person's name until the final words of the broadcast.

He would have loved telling this epic story — about a radio pioneer born and raised in the South.

"My father was a lawman in the early dirt-street days of Tulsa, Oklahoma," Harvey once recalled. "He was shot to death when I was 3. So, surely, at least some of my stubborn reverence for a policeman's uniform dates back to that night before Christmas many lonely years ago."

Perhaps it was the loneliness that made this young man fall in love with words and run off to join the radio. At 14, he began his career by sweeping the floors of an AM station in Tulsa.

Soon he was sweeping the streets for news. Reporting and announcing in Kansas, then St. Louis, and finally arriving in the city he would call home for the rest of his life — Chicago.

There he became more storyteller than newscaster.

As the radioman would later recall, he was living the glamorous life of an ABC anchor: getting up at 3:30 in the morning, eating a bowl of oatmeal and poring over news clippings.

And he'd toss in few stories to reflect his belief in God and country.

He was a supporter of Sen. Joseph McCarthy and an early backer of the Vietnam War. His most famous broadcast may have been in 1970 when he announced his opposition to Nixon's expansion of the war. "Mr. President, I love you," Harvey said, "but you're wrong."

By the time the anchor was in his 80s, his voice started to betray him. In 2001, throat problems took him off the air temporarily, and his son started to fill in regularly for him.

Last year, his wife and longtime producer, Lynne, died. When the radioman returned to the air months afterward, he wasn't the same.

"The loneliest days of my loneliest winter are still very much with me," he said. "The years don't always add wisdom, but they add perspective."

His famous anecdotes always had a twist at the end, but this one finishes just as it began — with a man who loved words and knew how to deliver them.

If you've ever listened to AM radio, you already know the rest of the story, and you know his name.